Back to the Tt eSPORTS review series, today we are going to take a look at the Tt eSPORTS Ventus Z gaming mouse that is aimed towards the hardcore the hardcore gamers and enthusiasts. If you haven’t checked out our previous Tt eSPORTS Reviews, you can find them here: https://www.dragonblogger.com/tag/tt-esports/ 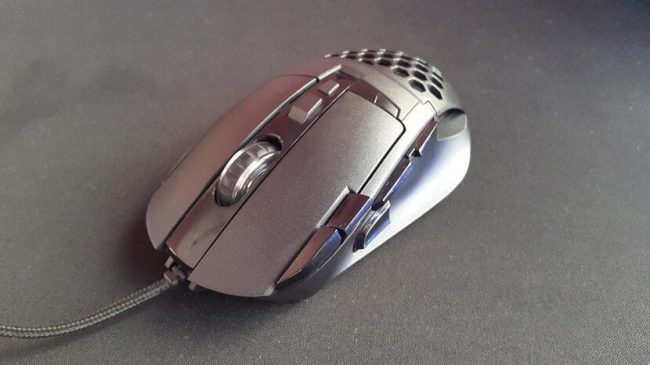 So the Ventus Z is a premium gaming mouse that features 11000DPI Avago 9500 optical sensor and has a total of 10 customizable buttons. It also features the exclusive Hive air ventilation design along with two illumination spots and a very ergonomic shape. Have a quick look at the unboxing video below: 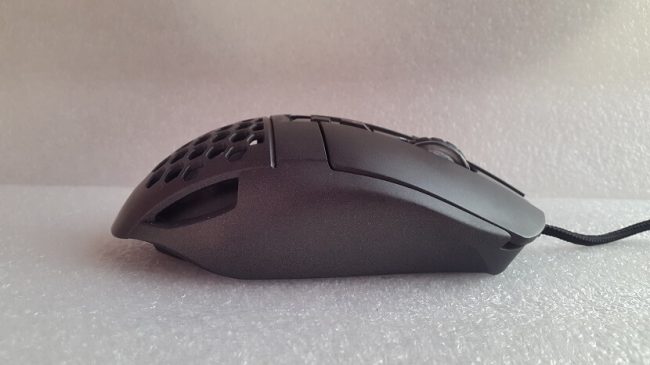 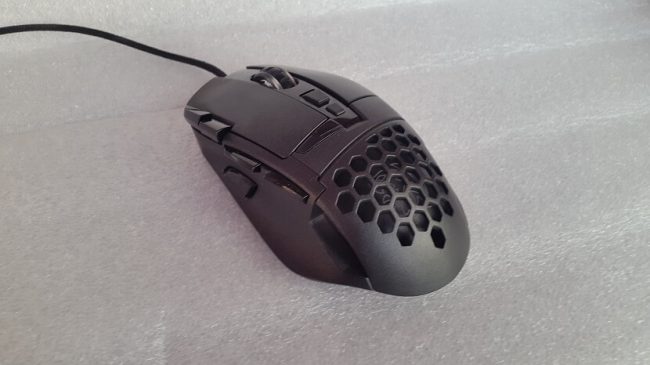 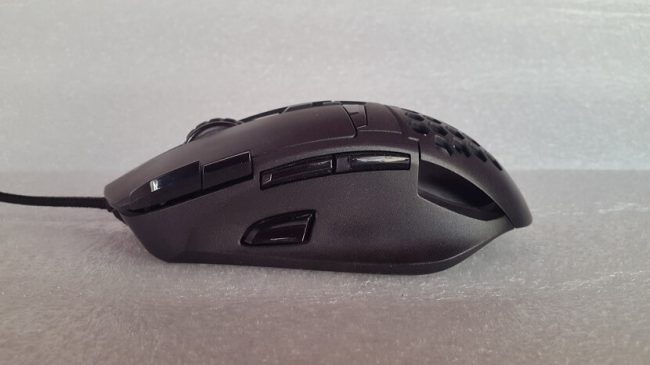 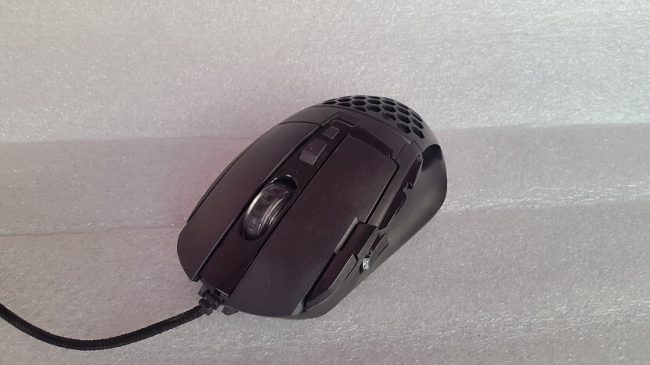 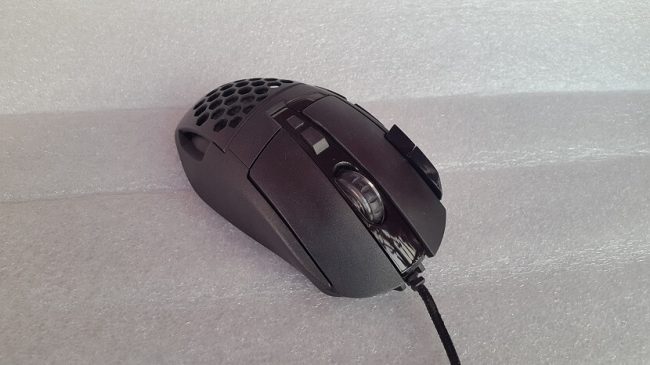 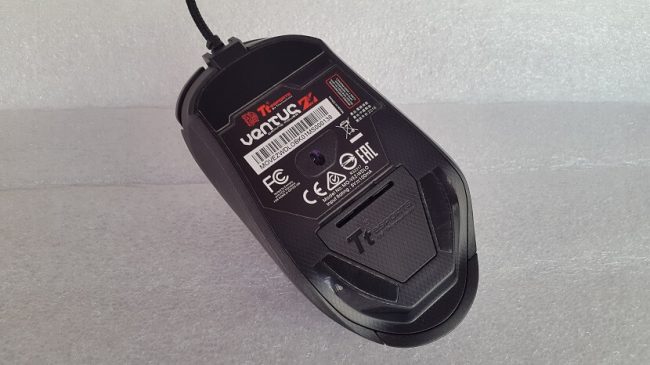 During the time I was testing the Ventus Z, the Avago 9500 optical sensor has performed well and I’ve got no complaints about it. The sensor is very precise and accurate, and I’ve used it on both a cloth surface and the Tt eSPORTS Draconem RGB‘s hard surface and there were no issues with the traction or movements. Also, I didn’t notice any positive or negative acceleration during flick shots.

The Ventus Z is making use of the 20 million life cycle Omron switches which has a great feeling to it. The Actuation point of the button and the feedback both feels good. Not only the Omron switches but the scroll on the Ventus Z seems good as well. It seems to have one of the best scrolling and middle mouse button I’ve had the opportunity to use.

Since the Tt eSPORTS mice are using a universal software, we are looking at the same command center software that was used with the Ventus R and Level 10M Advanced mouse. 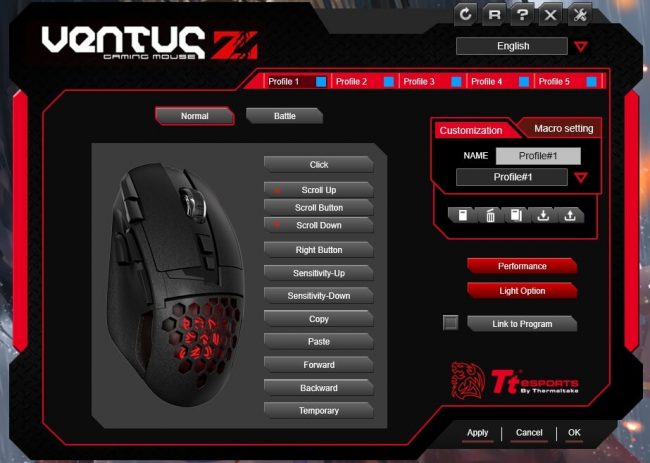 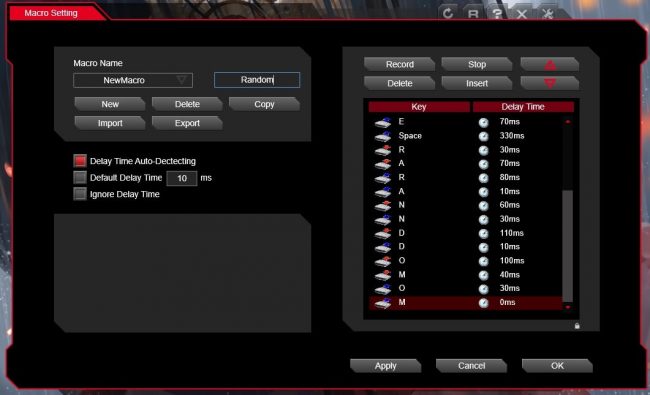 Setting a macro key is really easy with the Command Center software. You just go to the macro tab, give the macro a name, record your macro with delays according to your preference and stop recording. Then you go to the main page, select any button on the mouse, select the T-key and set your macro. And that’s it! Also, since the Ventus Z features a 256kb onboard memory, you can take every setting along with you anywhere, and over that, the mouse can store up to 50 macros so you can be ready any moment for anything. 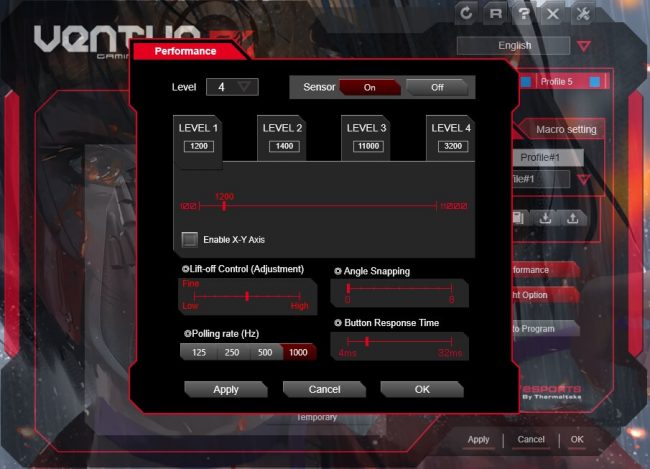 Then we have the performance options and with the laser sensor, we get a few more options to play with. First of all, we can set up the DPIs of the mouse into four different levels within the range of 100 to 11000 with the increment of 100DPI from here. Then we have the lift-off control adjustment and angle snapping. The angle snapping is used to filter your mouse movement and helps you with straight mouse movements, but you better leave that at 0 if you’re going to play FPS or any games that require accurate mouse movements. We can also adjust the polling rate from 125HZ to 1000Z and button response time from 4ms to 32ms. 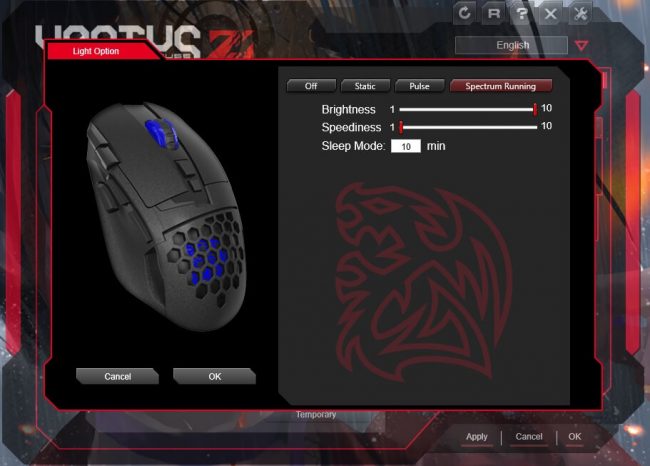 And finally, we have the light options. With Ventus Z, we get the same 3 LED options as any of their recent mice, the static, pulse and spectrum running. Not sure what else they can put there, any ideas? But with Ventus Z, you don’t have the option of setting individual color and modes to the two illumination spots, but must have the same. Probably a software update will add the option for that as well. Check out the bellow video to see the LEDs in action: 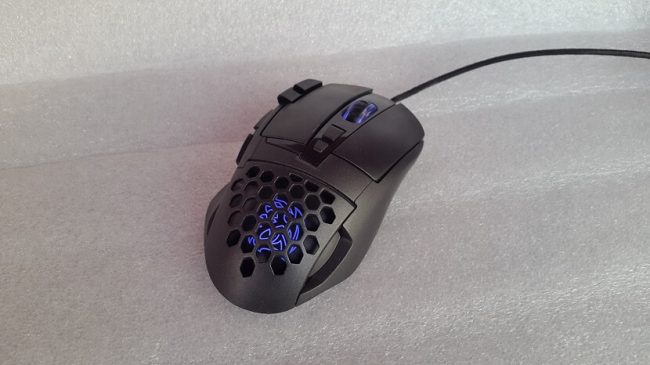 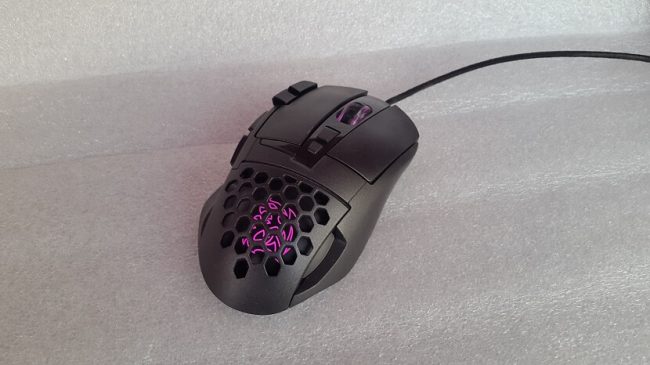 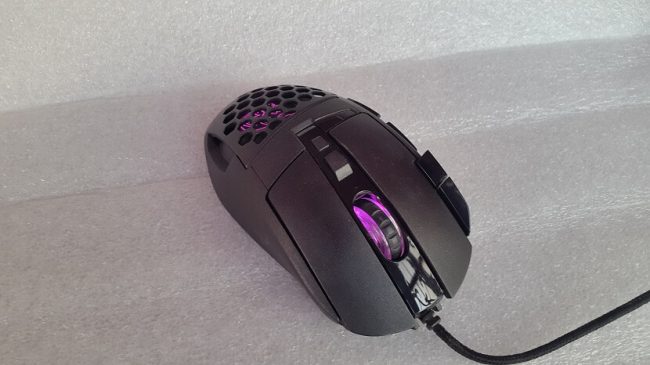 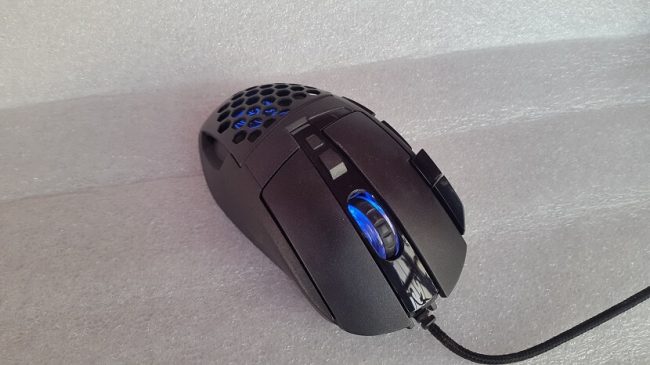 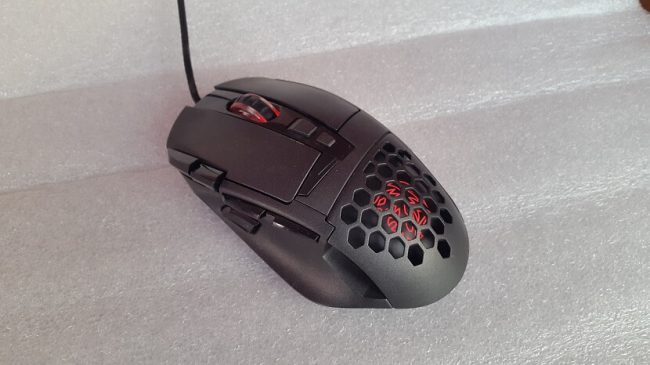 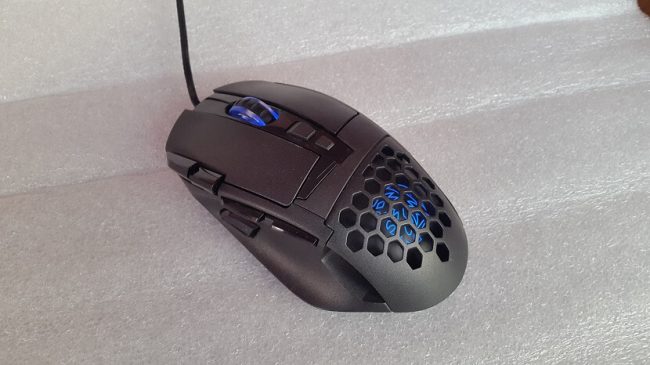 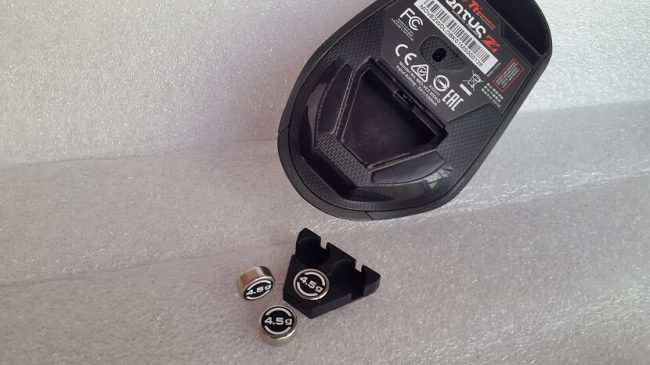 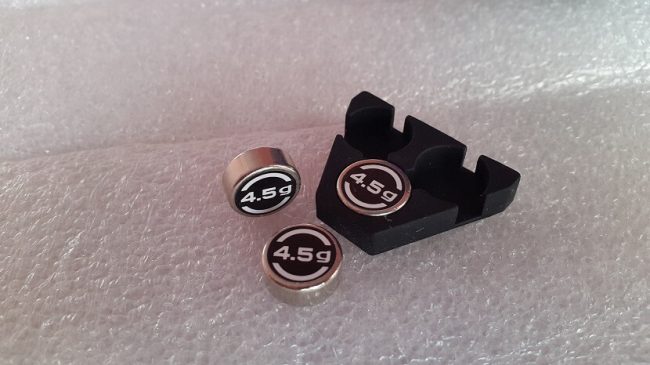 The Ventus Z also has a weight system. There’s no mention of the mouse weight with and without the weights on the website, but the mouse has a nice balance between light and heavy. Like any other mouse, the weight adjustment option is available at the base of the mouse, and we have 3×4.5g removable weights installed by default on the mouse. Now to me, the mouse feels perfect with all the three weights installed in the mouse, but since we have the option of customizing it, to each their own.

Putting it simply, the Tt eSPORTS Ventus Z takes the place of one of the best mouse I’ve used so far. It has left me in a battle of deciding which one to make my primary mouse between this and my previous favorite.

Before getting into technical stuff, let’s talk about the grip. The Ventus Z probably has the best design for players who has a grip somewhere between the palm and fingertip grip. The palm rests perfectly on the lower body of the mouse; the thumb isn’t touching the ground because of the contour on the left side and the ring and pink finger rests perfectly on the right side of the mouse with pink touching the surface a little bit. So in short, the Ventus Z has a well-designed body that I’d gladly like to recommend to anyone.

Now let’s talk about the Avago 9500 11000DPI laser sensors and the 20 million life cycle Omron switches. Both has performed well during my time with them, and I’ve simply got no complaints about it. The laser sensor worked well on the hard and the cloth surface without any issues, and I found them to be very accurate and precise that in some CSGO matches recently I feel like having an adrenaline rush, maybe I need to calm down a bit? Also, the 2x side buttons and 2x side buttons beside the LMB feels great and are placed perfectly to be approached even in intense gaming. I’m not really used to side buttons beside the LMB but it was a great experience using those side buttons for inventory switches in game and copy-paste functions (by default) on the desktop. And since we have a sniper buttons as well on the left side of the mouse, but I use the rifle and sniper both at same sensitivity, it wasn’t in use by me at all but no worries since it can be remapped to any other desired functions. That leaves the 2x buttons just beneath the scroll wheel. These buttons aren’t like the side buttons with hard plastic material and gloss finish. Instead, they are made of the same material as the body of the mouse and are best used for DPI level or Profile switch buttons so you have everything right underneath your palm.

Just when it feels like, we’ve covered everything in the conclusion, there’s one more thing left, the weight system. So yea, we even have the option of adjusting the weight along with all the other awesomeness the Ventus Z has to provide.
In the end, we usually end our reviews with something along the lines of “it comes down to price” and looking at the perfection of the mouse; I had an image of price around the 70$ mark but the Tt eSPORTS Ventus Z is available on the market for only $59.99! So I guess we should be good with a 5/5 star rating and the best value award and recommended award? Well, let’s just give it our sacred 5 stars Editor Choice award ;)