Hello there! VideoSolo Screen Recorder is a simple, lightweight video recorder, and screen capture software. It’s a simple to use program and takes seconds to install from its product page. The UI is incredibly simple, but pleasing to the eye, the various options available to you make controlling the quality of your media incredibly simple, and easy to create. My name’s Opal, and I’ll walk you through its functions, as well as provide some incredibly useful examples for how you can use this program in your own daily content creation activities. Let’s start with the UI.

Once you’ve downloaded the installer, and installed the program, you’ll be met with this screen. There’s no need for a complex setup, but tweaking your settings might be needed depending on what resolution, format, and general quality of media you’re looking to create. Let’s get to the video recorder and focus on tweaking your settings.

Click the gear I’ve circled, and you’ll have access to a variety of settings, including your resolution, formats, framerates, and a variety of hotkey and mouse settings. Clicking the arrow next to your webcam will allow you to set your webcam, but the program operates off your default microphone, so you’ll need to move into your system settings to set that up. The switches at the bottom allow you to disable various things you don’t want in your recording. Don’t want your webcam to be used? No problem, just flip that little switch to the off position, and you’re golden. Let’s go ahead and move into the settings. 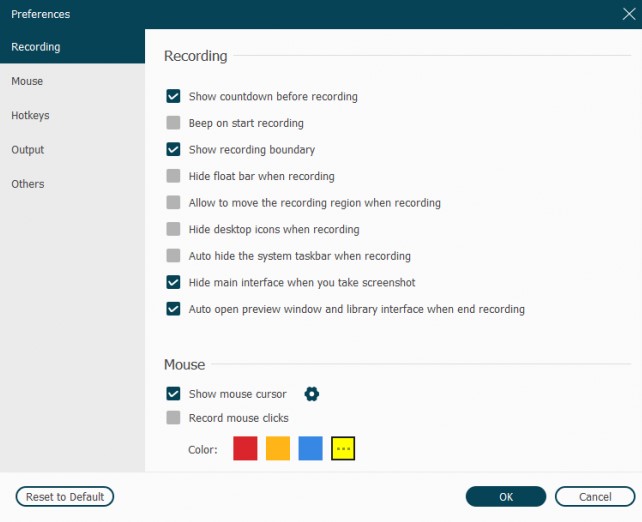 The recording section comes with a variety of useful settings, from audio cues when you start recording, to giving you a large, clearly visible countdown before the recording starts. It even goes so far as to offer you the option to hide specific desktop elements, from your icons to your taskbar. The mouse section allows you to decide whether your clicks are recorded, change your mouse color to make it clearer in tutorial recordings, presentations, or other visibility intensive activities. The hotkeys section is where you set recording hotkeys to your keyboard, and offers everything from multi-key hotkeys to binding things to your mouse. Output allows you to set your resolution, your format, frames per second, the folder your recordings default to, and the general quality of your audio and video. It offers options to separate your audio and video into two separate folders, which is useful for editing purposes. At the very bottom, you’ve got the others section, which gives you the options to open the program when you boot up your PC, and whether or not you want it minimized to the system tray when you close it or closed entirely. Moving back to the main screen, click the “custom” box allows you to set a specific area of your screen to record. The chain link below this allows you to unlink your resolutions height and width, allowing you to record strange chunks of your screen as your strange little heart desires.

Moving back to the main launcher and pressing the audio recorder button brings us to this screen.

Everything here works similarly to the video recorder, and the icons on the top right all function the same as they do, opening up various tabs in the settings when pressed. At any time you can click the camera in the far right corner to take a screenshot, which brings up a drag and drop interface similar to the snipping tool built into windows, but with more features including additional pens, the option to pin a snippet to a separate window, and some general editing tools.

Onto some things I was able to do with this piece of software in under a day, as well as some nice examples of things YOU could do. While trying out the software I: Did an entire test recording for a podcast, YouTube video, and sent some rather goofy audio to a good friend. Took several screenshots of games for reviews I might do, took every screenshot used in this article, took several screenshots that were going to be used in this article but instead became my desktop background, and sent a few snippets from world of Warcraft to a friend. You however could make a quick tutorial, design an animated desktop background using wallpaper engine, use the screen capture option to help you study by pinning the things you need to know in neat little screenshots for you to go through, the sky’s only limited by your creativity and need. Again, it’s incredibly lightweight, the free trial the site offers is on par with WinRAR, and it won’t eat up your GPU. Recording is incredibly user friendly, and you could probably teach your grandma how to use it. I’ve been Opal, and I hope you have a solid time using your new VideoSolo Screen Recording Software.