Even Apple was never able to predict the amount of success that the Apple Store would bring them. Google have also taken this idea and allowed the user to download software to their Google Chrome operating system. Microsoft have always been left behind in this respect, the full release of the upcoming Windows 8 operating system will send Microsoft hurtling back into the fray however, it will enable users to access the digital Windows App Store where they will be able to purchase new software for their computer.

The Windows Store is the only way to distribute apps that are compatible with the new metro system of the computer. This is to protect users from being affected by malware or viruses that may be distributed via means of computer software. Developers will be able to register soon to distribute their products via the Windows Store. Microsoft will get a 30% cut of all sales that are made through this system, although they will not get a cut of in-app sales. The store can also be used as a means for developers to advertise their standard desktop based applications. 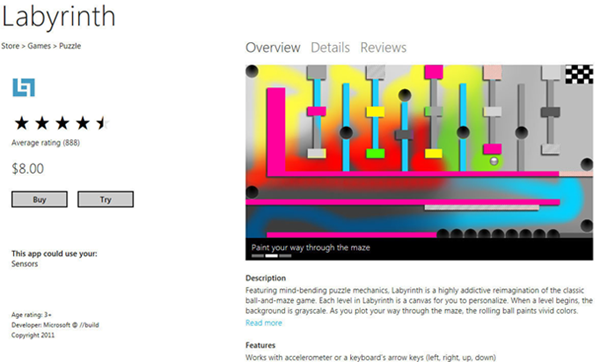 There will be both free and paid for software on the system, with the paid for software being priced anywhere between $1.49 and $999.999. Unlike the Apple store developers will be able to offer free trials easily of their products which should help boost the sales of various pieces of software as there will not be so much blind buying. Although of course this means developers will need to create mind blowing apps for their software.

The Windows Store is currently in beta and was launched with the consumer preview edition of Windows 8 at the end of February 2012.

I feel one of the best benefits of this store is that it enables enterprise users to distribute metro apps throughout their company without having to go through the store acceptance procedure. This is very useful if you want the employees to use a piece of software that would be not beneficial at all to anyone in the outside world.

Developers are currently able to start developing apps for release with the full version of the Windows Store. There are a number of guidelines which they need to follow in order to ensure that it is accepted for inclusion, however the guidelines are not as strenuous as that of the Apple Store. The key is that the apps should work predictably and fast on all computers no matter how good their hardware is. Full specifications can be found at:

Whilst the Windows App Store may not seem like one of the most exciting addition to the Windows 8 operating system there are plenty of features that are beneficial to the user. This type of software delivery is fairly popular, it enables developers to create new applications for our software system without going through expensive distribution channels. It also enables the best applications to get worldwide exposure without expensive advertising campaigns. This truly is a remarkable addition to Microsoft’s Arsenal and will be beneficial to the consumer whilst earning the company a lot of money.