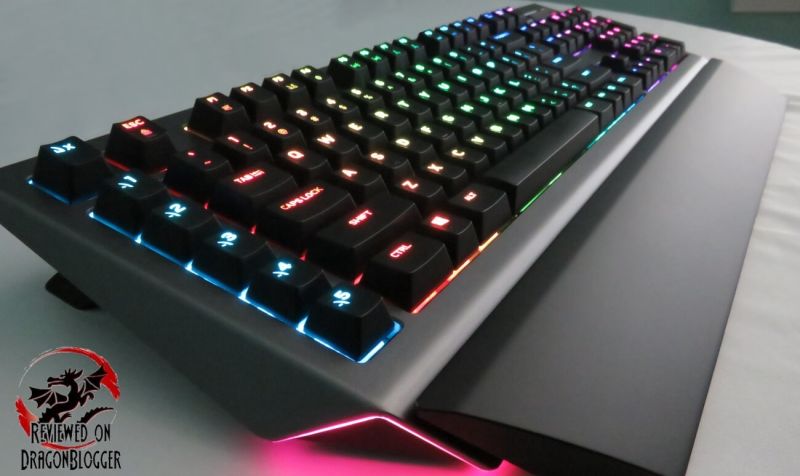 Here is the keyboard with the wrist rest attached, the AW168.  The Alienware Pro Gaming Mechanical Keyboard is connected and lit up like a rainbow.  If you look at the bottom left hand corner, you can see a bit of the ambient lighting, not only the keys light up here.  Let’s take a second to see the Alienware Gaming Palm Rest unboxing. 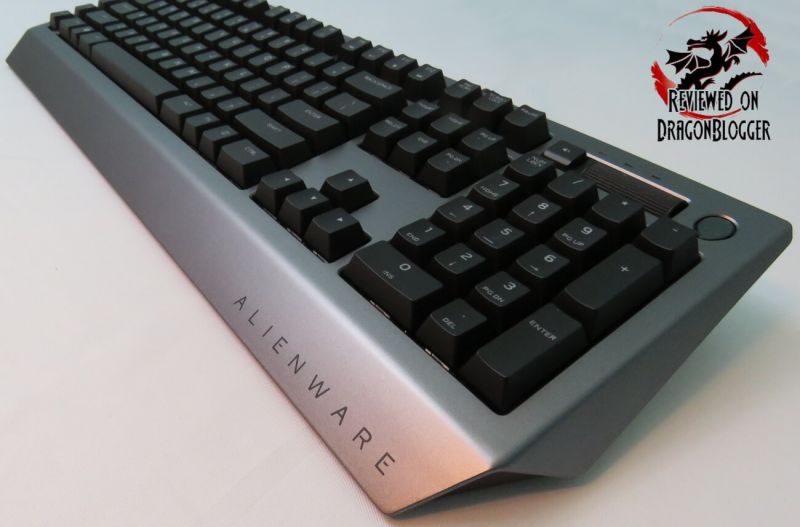 Looking at the other side with the LED lighting off and the AW168 wrist rest off as well.  Let’s you see the silk screened ALIENWARE logo. 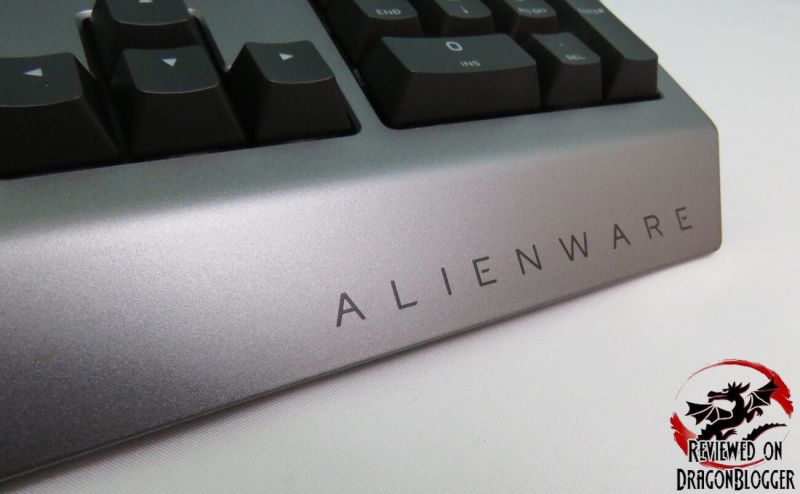 A closer look at the logo.  Nothing flashy, just nice and classy.

Flipping the keyboard for a second, we find what almost looks like to be a standard back of a keyboard, though notice, the sides are not flat.  Instead of plain corner, the sides curve more to support its unique angles and lend to the palm rest, though not currently included in this picture.  Let’s dig in a little deeper and see what this is made up of. 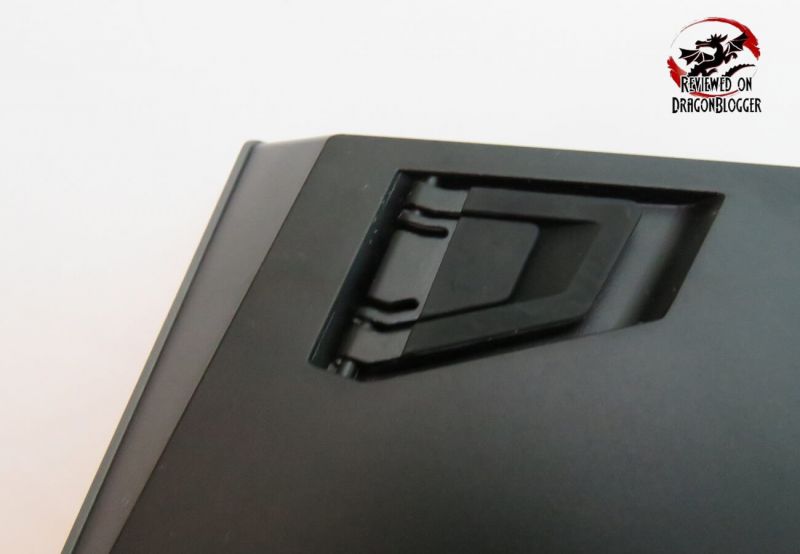 Top left and right-hand corners, we find the feet.  Obviously like most they pop out as to add a little move curvature and elevation but there’s a little something less obvious to its design. 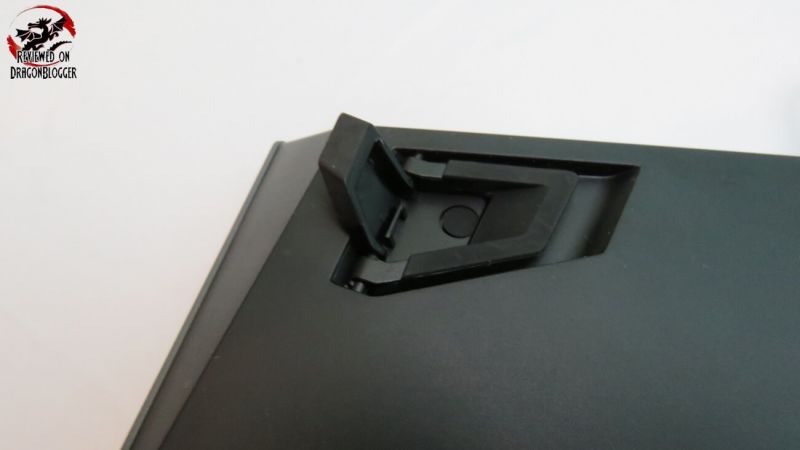 Like most, you have your standard tiny elevation which is not bad, just very common and expected. 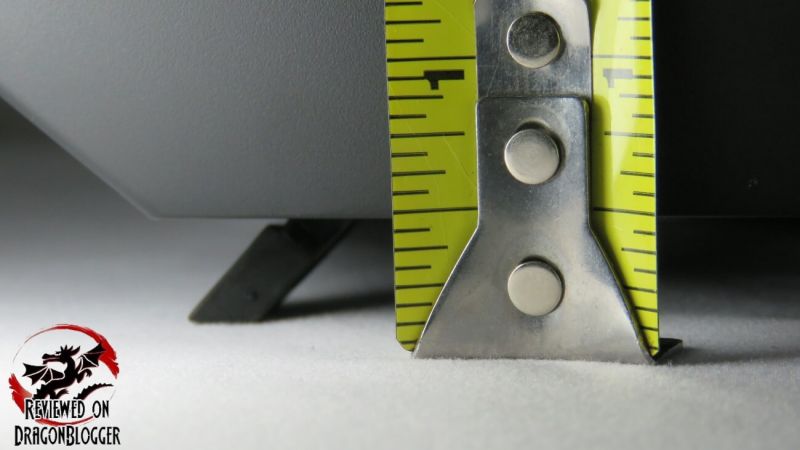 This adds about half an inch of height to the rear of the keyboard, again, pretty standard but I like my keyboard a little more elevated and I think Alienware knew this. 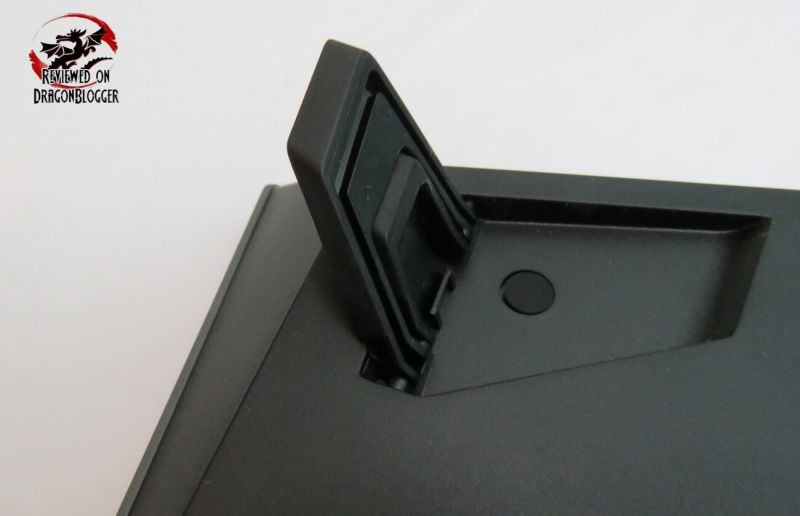 That was only 1 of its 2 levels of elevation.  Here is an example of the additional elevation. 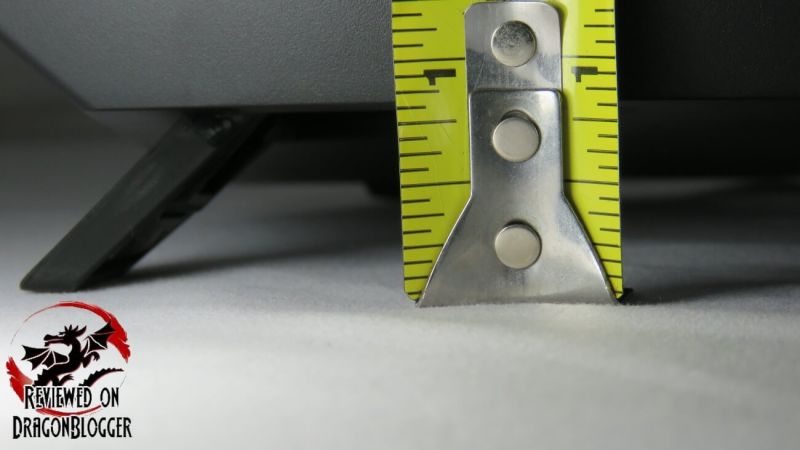 The second level almost brings it to a full inch of height, almost doubling its height.  A welcomed treat and what I am currently typing this review as.

Focusing on the back of the keyboard again, we find the sticker.  The sticker goes over the fact that is a USB keyboard, then goes over the model number, input rating, where it’s made a bunch of certifications, serial number and a QR code. 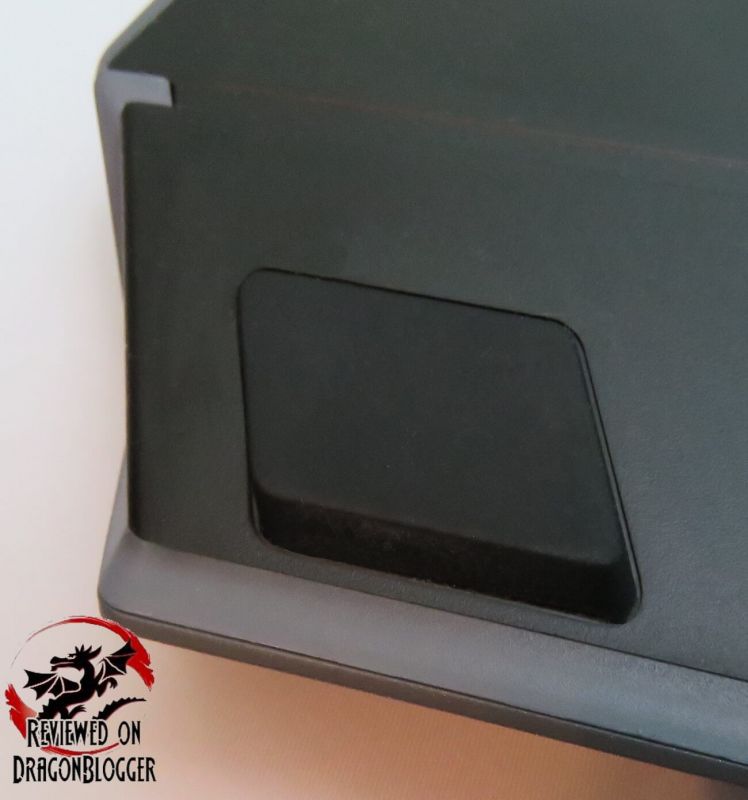 Bottom right hand corner we have one rubber pad. 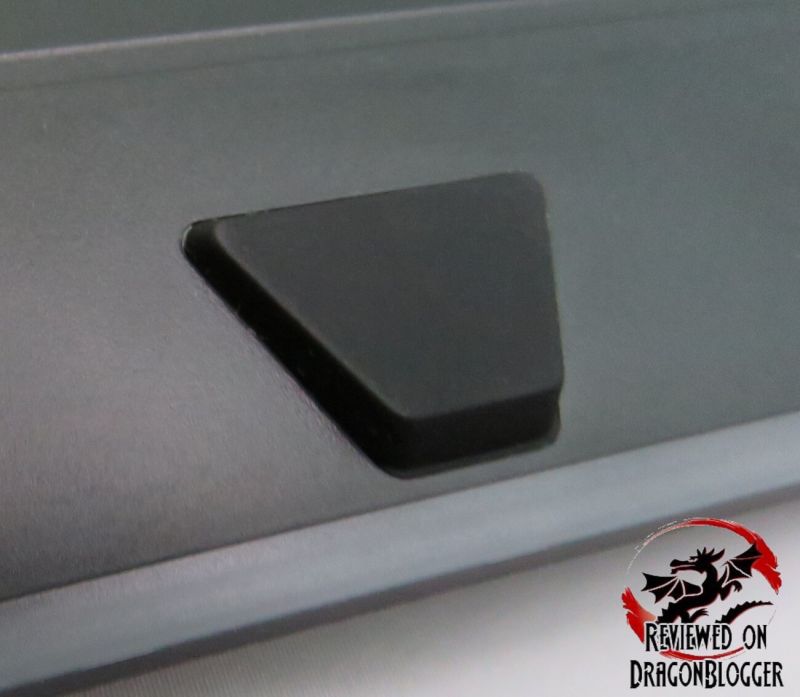 The bottom center of the keyboard has another rubber pad. 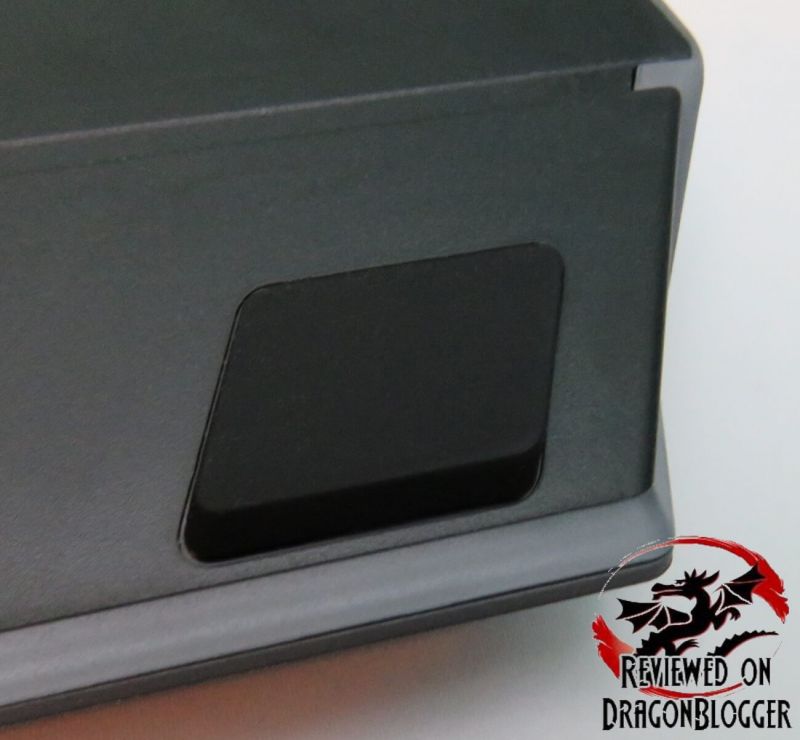 Then finally, the last of the 3 feet on the bottom right hand corner.  Both in this picture and in the first of the 3 feet you can see a little white strip on the edge.  This is where the ambient light comes from, they are just off right now so that you can see them a little more clearly. 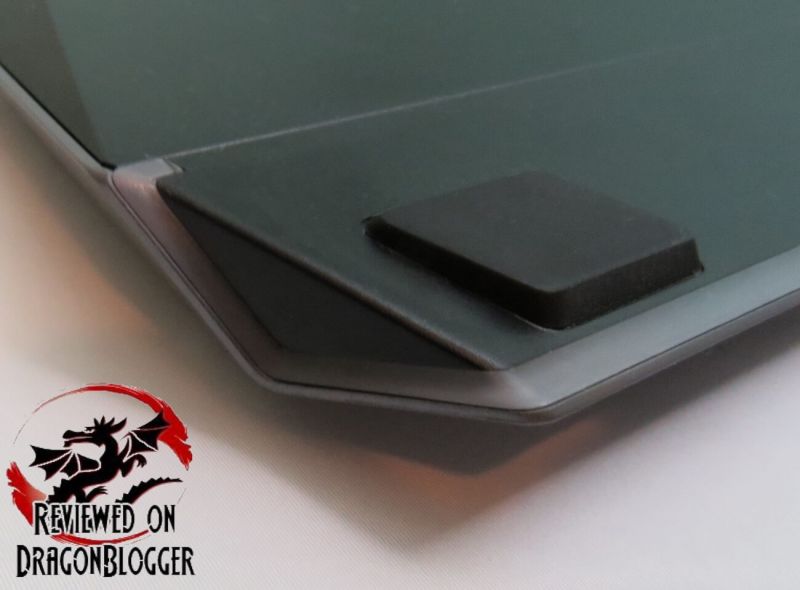 Here is one edge exposing the white stripe, which goes along through the entire bottom front portion of the keyboard to the other end of the keyboard. 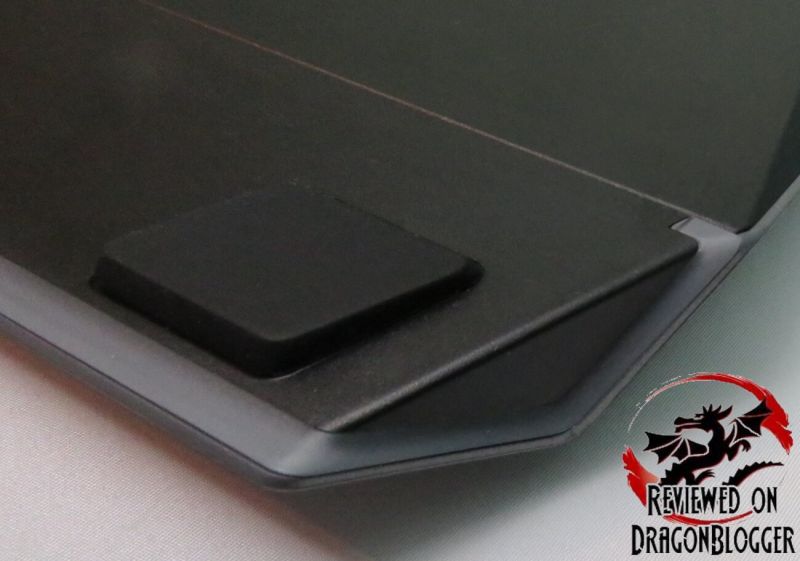 Here’s the other side. 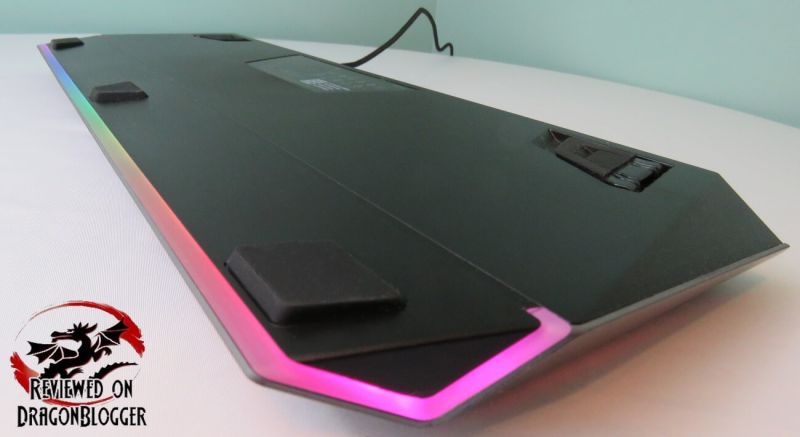 Here’s that same strip illuminated a bit like a rainbow.  The ambient light to me is not incredibly noticeable, but every little bit helps.  Let’s go back to the top of the keyboard and explorer what it has to offer.

Going from left to right, we first find the Macro keys.  The top key, the Macro toggle, Macro Record key allows you to set macros when pressed once, and if held for more than 3 seconds allows you to record macro.

Macro Keys 1 ~ 5, are where the macros are recorded.  Each 3 is part of a 3 mode key function actually allowing you to record up to 15 different macros. 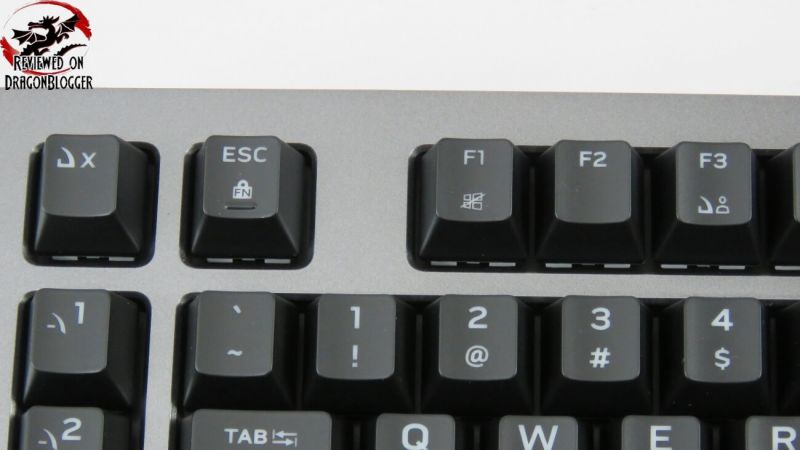 Adding the Macro keys we showed previous, we move a little more to the right.  Here we can see the Escape key doubles as a Function lock key, locking the function keys from F1 ~ F12 when pressed along with the function key.  I will show you a little later here where the function key is.

F1 along with the function key, enables or disables the Windows key keeping you when locked from accidentally hitting the windows key minimizing your full screen application.  This key is also known as the Game Mode key.

F2 serves no special fun, but F3 is the Profile stored on board key.  Pressing Function along with F3 allows you to store up to 3 sets of profiles or lighting configuration.  Pressing that key set again, goes to Profile 2 and yet again for Profile 3.  F4 along with the function key, launches the Alienware Control Center which allows you through software to record marcos, remap keys, change lighting effects and a host of other features.  We will go over this a little later in the review.

F5 and F6 respectively allows you to either decrease or increase the keyboard backlight intensity.  Did I forget to mention you will once agent have to hold the function key and one of these keys to activate this function?

F7 and F8 respectively along with the function key allows you to either decrease or increase the ambient light on the sides and the bottom of the keyboard.

F9 ~ F11 are the respective Media playback keys.  F9, Plays the previous track or chapter, F10 acts as the Play or Pause button, F11 is stop and F12 plays the next track or proceeds to the next chapter.  Each key as usual will have to function alongside the function key.

Skipping over the standard Print Screen, Scroll Lock and Pause, we find this very unique set of keys.  On the left, we find the Mute key, to mute out your sound, then we find one of my favorite keys, the volume slider.

Rather than utilizing a set of Function keys, relying on tapping function and an F key to adjust your volume, here you can actually slide up or down to raise or lower the volume.

The alien head here is not just for looks, it serves it own special function as well.  Pressing this button loads custom lighting effects for the Alienhead logo.  This can also serve to completely turn on or off the keyboard lighting.

While not amazingly uncommon, is not on every keyboard, but we have the Windows Key wedged between the Control and Alternate keys.

Then on the right of the space bar, we have the standard Alternate and control keys, but in between then we have the Function Key and the Menu key.  The function key is used in conjunction with the F Keys and the Menu button, one of my favorites acts like a right click of the mouse. 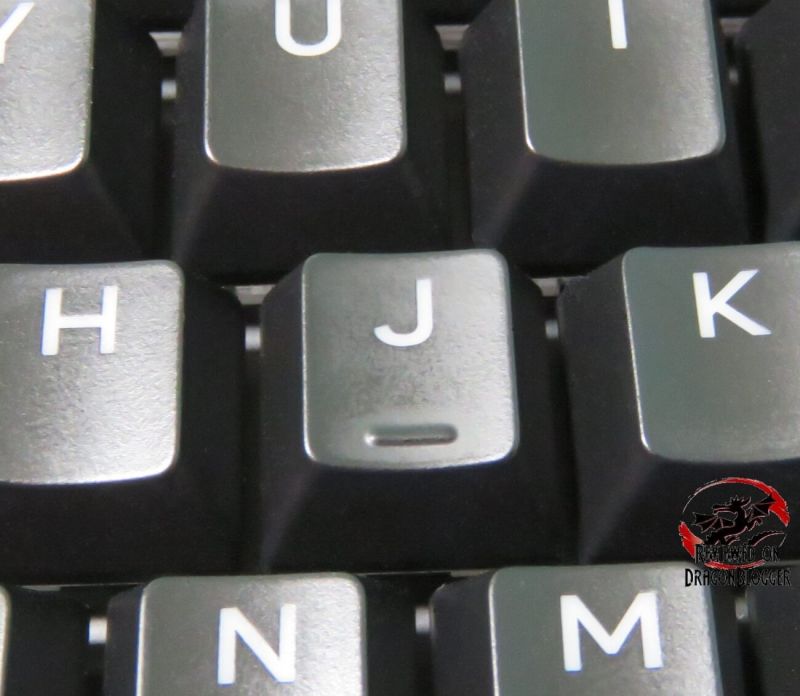 We have the usual home button ridges typists know and love, the J 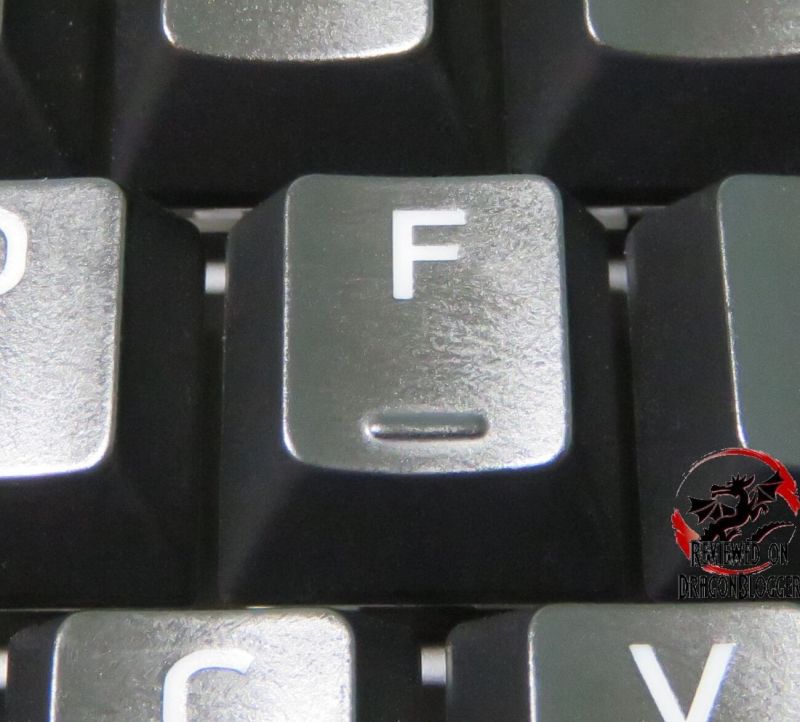 And the F home key ridge.  What if I told you there was another, a home for gamers? 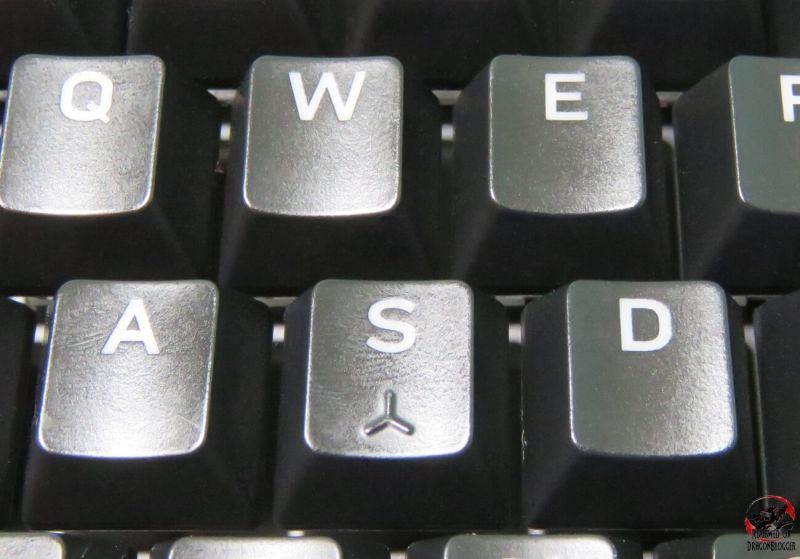 Alienware, being a gaming first company didn’t forget about their roots.  They gave the S key the home ridge so that you always know where WASD is, thank you Alienware.

We have gone over the keys above… but what is under the keys? 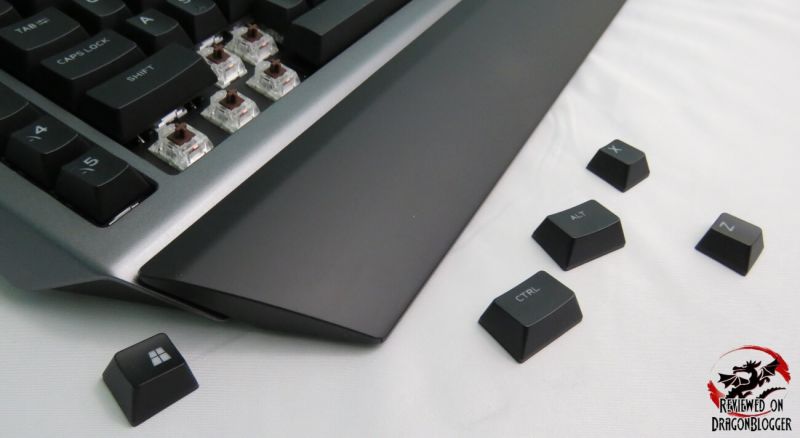 Removing a few keys, we can find the switches and maybe, just maybe the LED lights as well.  Let’s go in a little deeper. 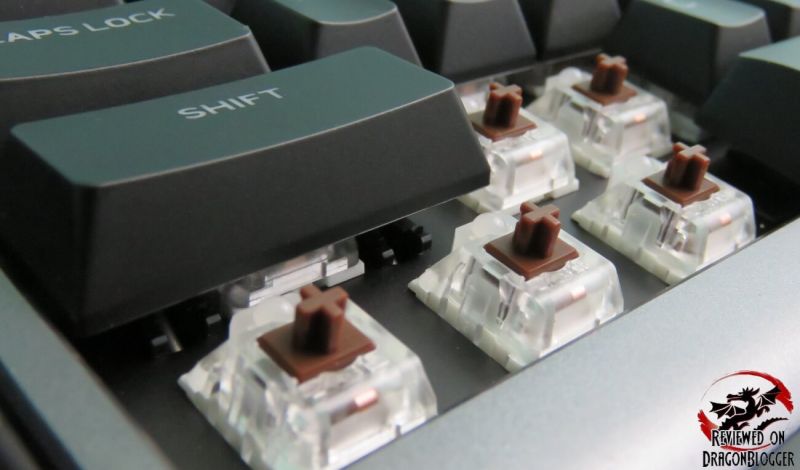 Beneath those keys we find Kailh Brown switches, affordable very quiet keys and even though you might like loud clicky keys like I do… or maybe did the tactile force behind these keys is so very soothing or maybe it’s the bounce back?  Mind you, you will still here the plastic keys touch the base of the switch housing, so they are not totally silent, but they are not clicky at all.  We will go over this in a little more detail later in the review. 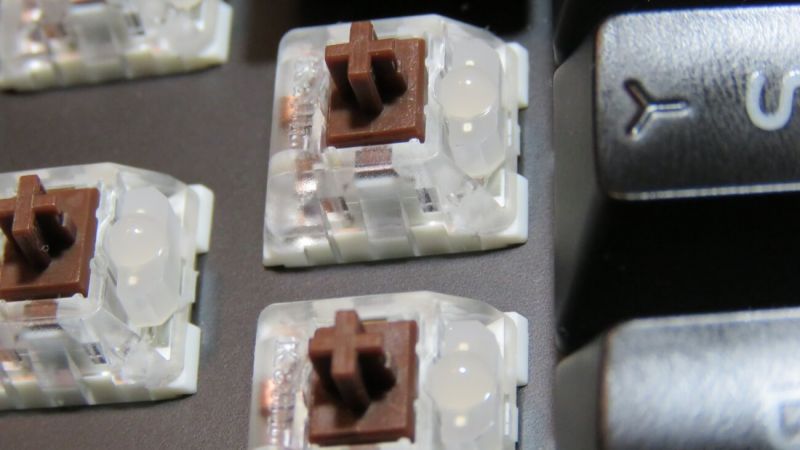 Coming in a little closer, we can see the LED lights.  What do they look like on though? 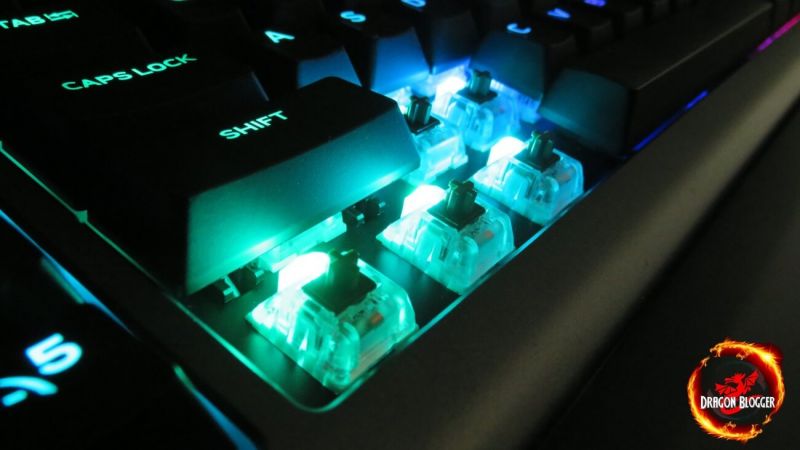 That’s pretty sexy I would say.

So now that we have a better understanding of the keyboard, its looks and many of its functions, let’s get a bit more into the lighting, Effects, keys and Alienware Control Center.