In this section, I go over building a complete PC inside of the Fractal Design Define R6 TG case.  I will list the parts going into the build.

So let’s go into building it with all the components above.

In that video, I showed you guys the basics on cabling then panned away for a sec and showed you the build completed. 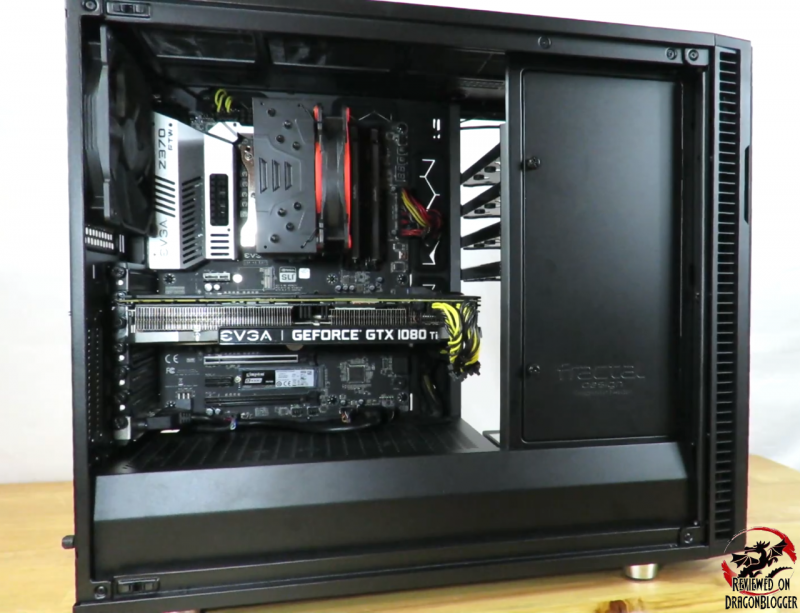 So let’s see what the system fully built, how the thermals are. 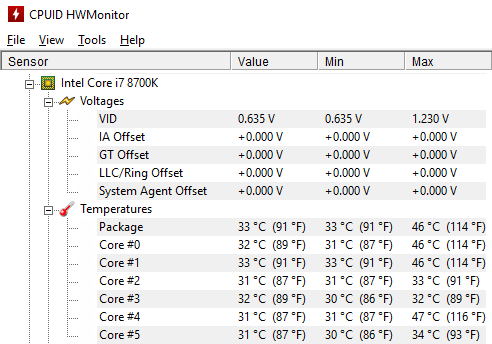 With the Intel Core i7 8700K stock and idle for 5 minutes on the Arctic Freezer eSports One, above are the temperatures.  Core #2, #4 and #5 are the lowest currently at 31°C.  Core #4 was at one point between start up and this screenshot the hottest at 47°C.

And the EVGA Geforce GTX1080TI FTW3 is at a nice 55°C while idle.  So let’s get a little stress on these components. 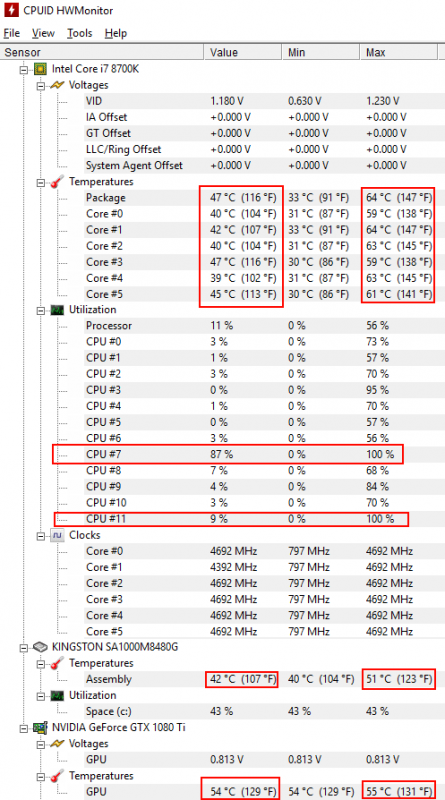 For the initial test, I rendered a 4-minute video using Wondershare Filmora.

Now let’s do a little more specific testing on each of the 3 potentially hottest parts in a computer. Let’s first test with CINEBENCH. 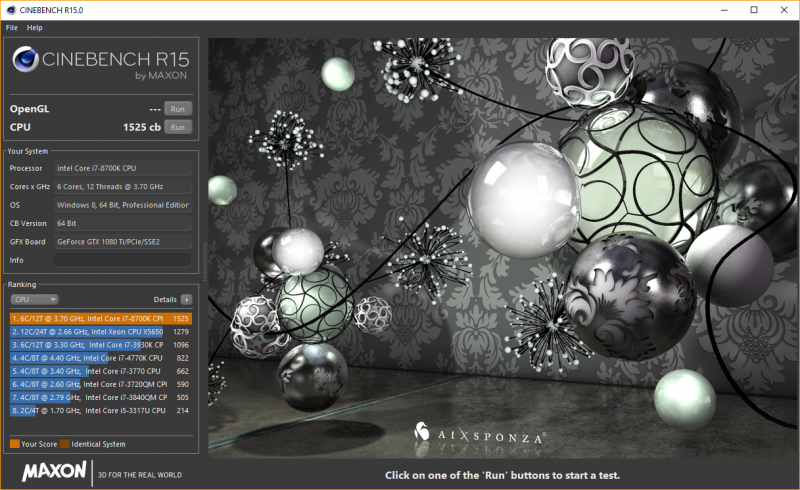 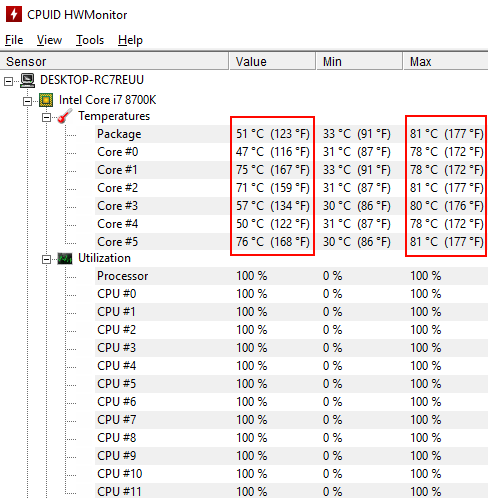 Here we can see some interesting things the Arctic Freezer 33 eSports One can do in general.  When the CPU is idle or is running minimal tasks, the CPU fan spins very slowly, just to get some air through those fins.  Once the CPU hits a certain temperature, the fan will ramp up to what ever speed it needs to reduce the temperatures to a more acceptable temperature.  You can set this temperature manually via the BIOS or use the automatic settings set by your motherboard manufacturer.  This heatsink does an amazing job cooling the CPU and very quiet as well.

In the image above, you can see the highest temperature the 8700K processor hit was 81°C but its active highest temperature was 76°C.  The profile here in the BIOS was not manually set, everything was on Auto.  The highest RPM’s this fan can hit is 1,800 RPM’s but when not running CPU intensive applications, it will run at only 200 RPM’s.

During these tests Wondershare Filmora was running as well as Chrome (with 31 tabs open), Microsoft Word, HWMonitor and Paint.NET.

Let’s see how the EVGA GTX1080TI FTW3 reacts to some stressing. 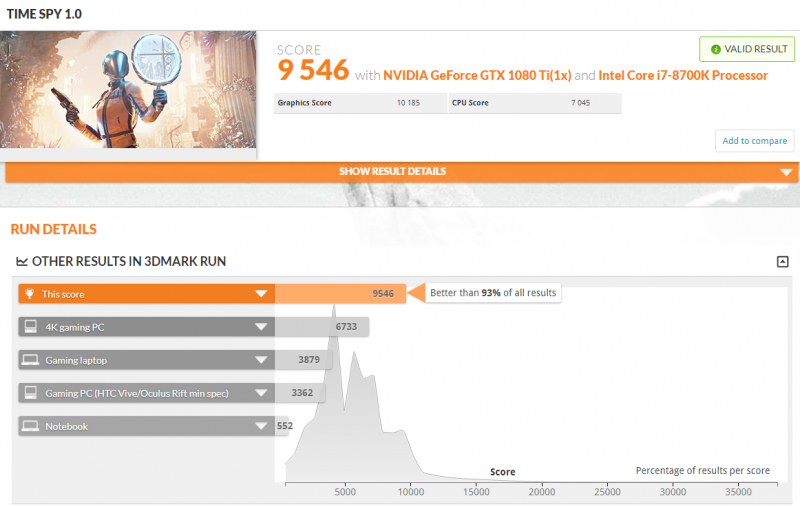 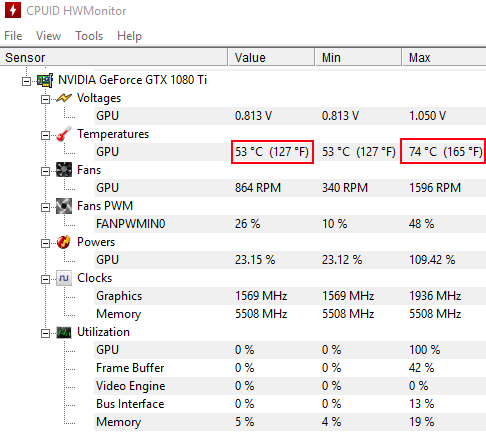 Highest temperatures reached were 74°C and the average temperature was 53°C.  This only had Chrome, HWMonitor, Word and Paint.NET running. 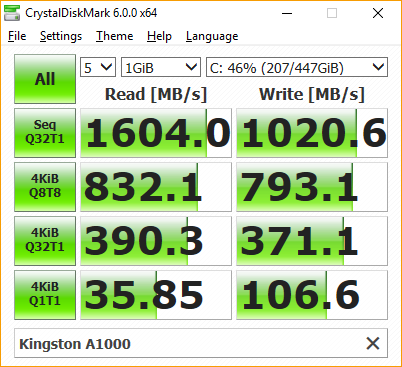 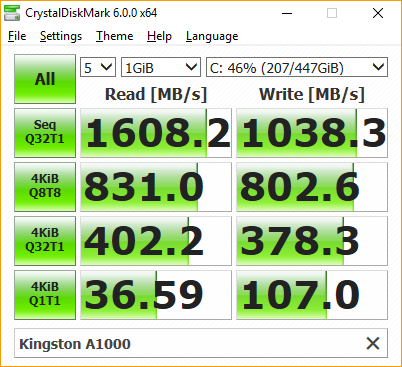 Without the thermal pad it did get hotter, 7° hotter without the thermal pad but it actually performed better too, though only slightly.  It may have to do with the Modular Storage Plate in the case blocking some of the air flow…. well we can change that but maybe not in the way you are thinking.

Let’s check out this video to see how we handle fixing up the air flow.

With that out of the way, let’s see how hot that M.2 PCIe SSD gets.

Removing the drive cage dropped the temperature 2° lower than the previous tests. 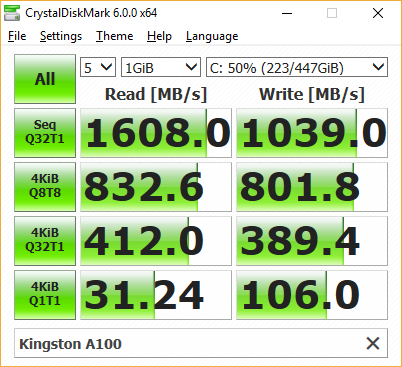 This was also done without the thermal pad, so let’s put it back on and see what happens. 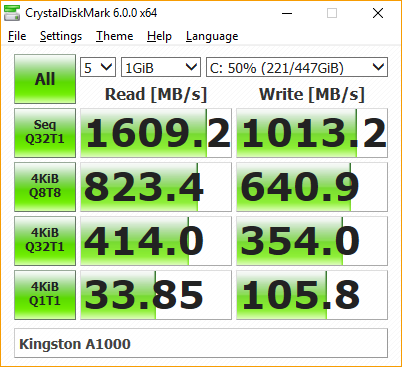 Please know that the scores were provided to show you that it was tested, not to actually measure the performance of the drive since I was doing other things while the tests were running.  Each time I was testing I had the same amount of chrome tabs open, running the same pass of Wodershare Filmora rendering the fixing the airflow video with word open and Paint.NET.  I wanted to make sure everything was the same and nothing was thrown off by irregularities. 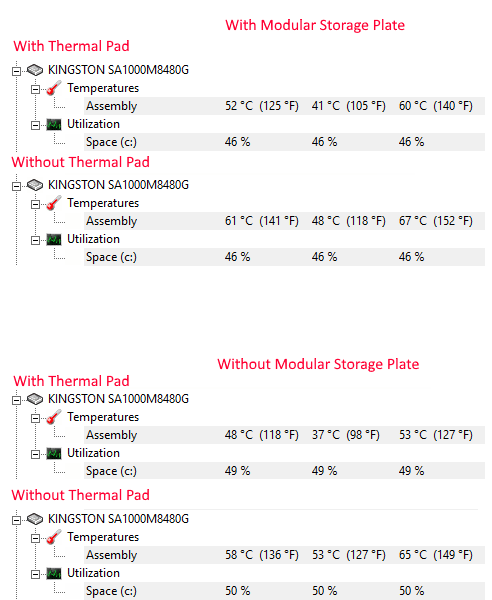 Let’s see how this does for the CPU. 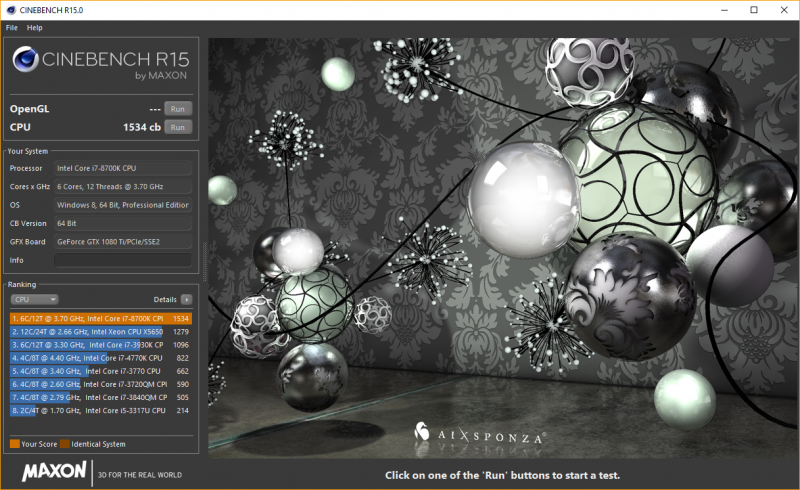 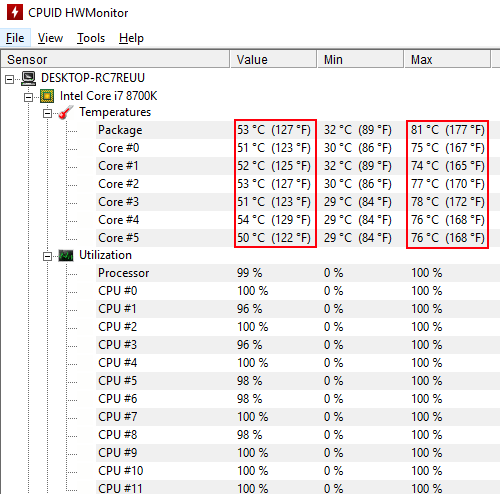 Here are the final results, let’s check out the comparison. 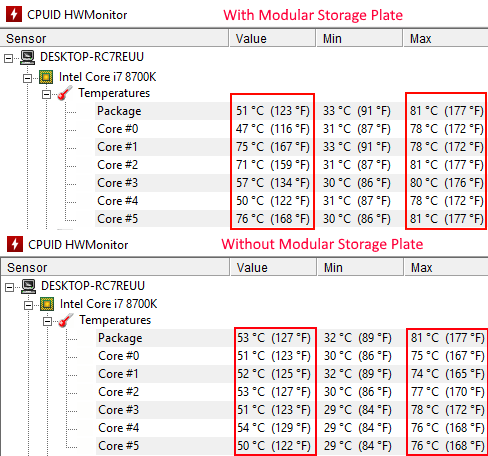 Comparing the 2 results, we can see the max value for all of the cores was anywhere between 2 and 5° lower.

The performance did slightly improve, but by a negligible amount. 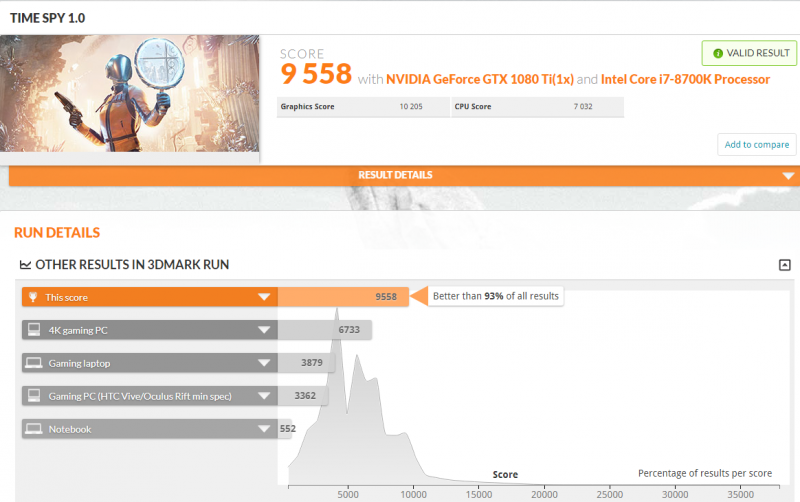 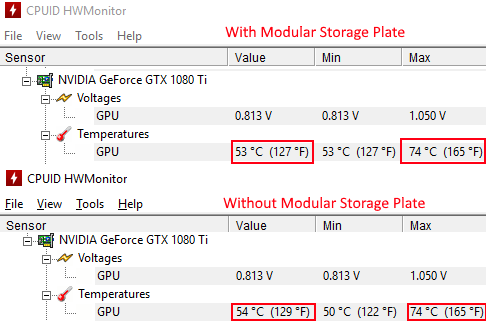 Here we can see removing the Modular storage plate made no difference.  In the first and second pass of 3 of the test the highest temperature was 73°C, so it was 1° off which is not enough to signify any real difference.

These tests confirm that while the Module Storage Plate is handy, if you don’t need the 6 additional drive trays, just get rid of it.  Also, this does help for liquid cooling units.  One thing that this will also help is since the trays are not in the way, this will lower the sound the case creates, but honestly, its not much.  Let’s check it out.

That’s incredibly quiet right, there is a little noise at the beginning when the fans revs up but then afterwards its quiet again.  So with all the said and done, let’s go ahead and see my Final Thoughts and Conclusion and see if you agree.

Continue to: Final Thoughts and Conclusion