For your reference, I will list the build specs as well to help you compare results with your own system.

Here are the programs I used for the benchmarks

The base benchmarks are running the CPU at stock (Auto) speeds and the memory XMP Profile set and slightly overclocked to 3200Mhz (I will show you the setting towards the end of the base benchmark). 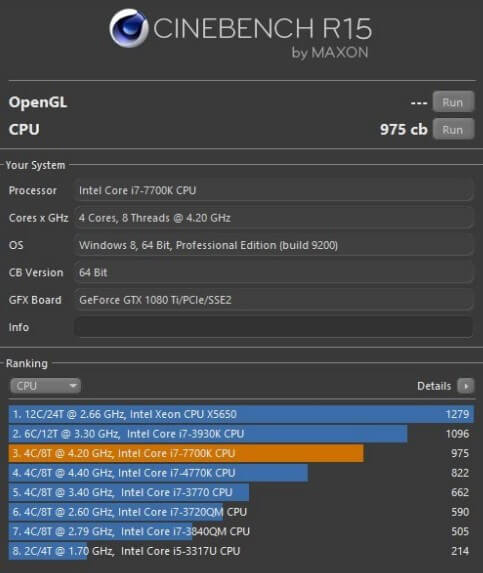 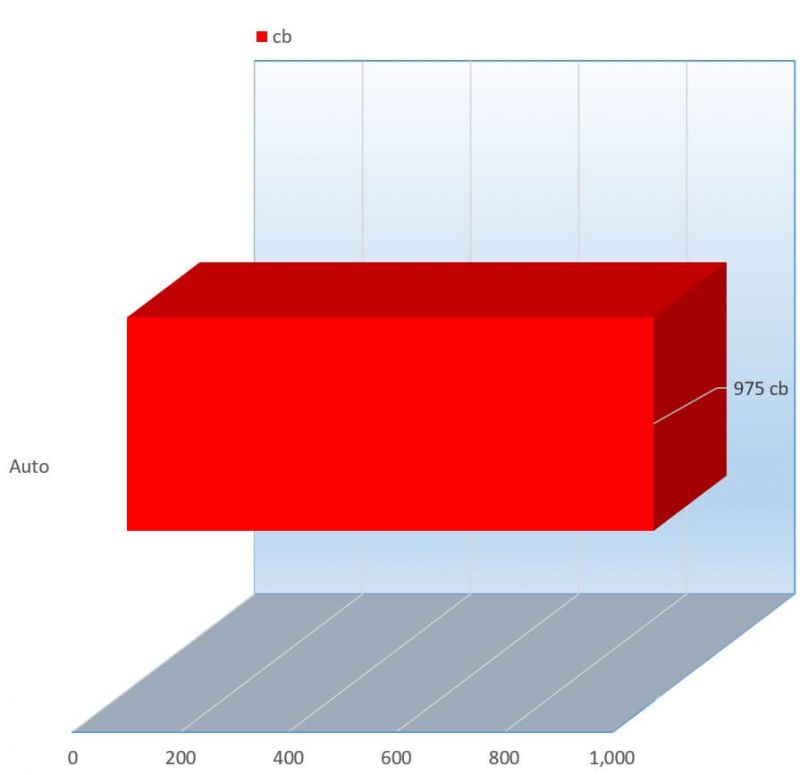 Here in Cinebench, we can get a baseline score of CPU performance.  With a quick test, we can see that the stock Intel Core i7 7700K receives a score of 975 cb.  If you have never used Cinebench, this shows you the performance of your CPU against similar CPU’s.  During this test, the highest CPU temperature among all 4 cores and the package was 58°C. 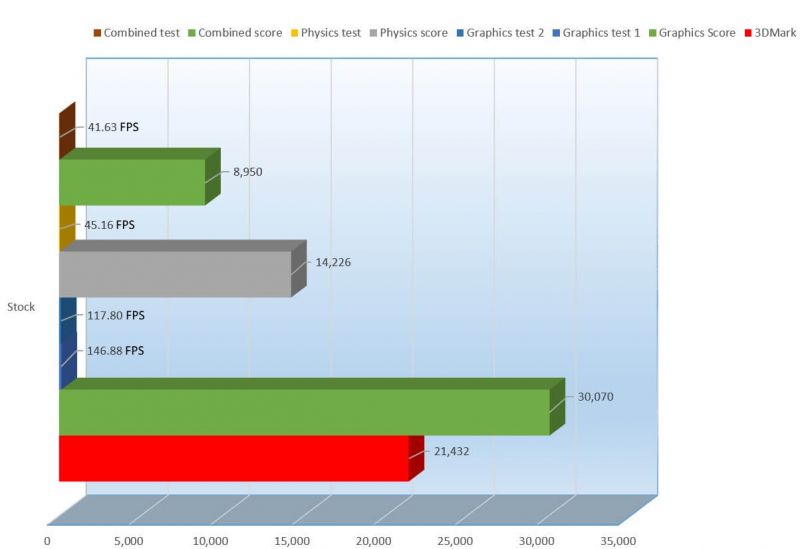 Disregard that Validation issue with G-SYNC, my monitor is an Asus PB287Q and sadly it does not have G-Sync.  A pretty decent score on its own, especially rocking that EVGA Geforce GTX1080 TI ICX Gaming. The highest temperature the Intel Core i7 7700K processor reached was 61°C and the GTX1080 TI was 67°C.  A decent 98% better than all other benchmarks put this in a very nice spot. 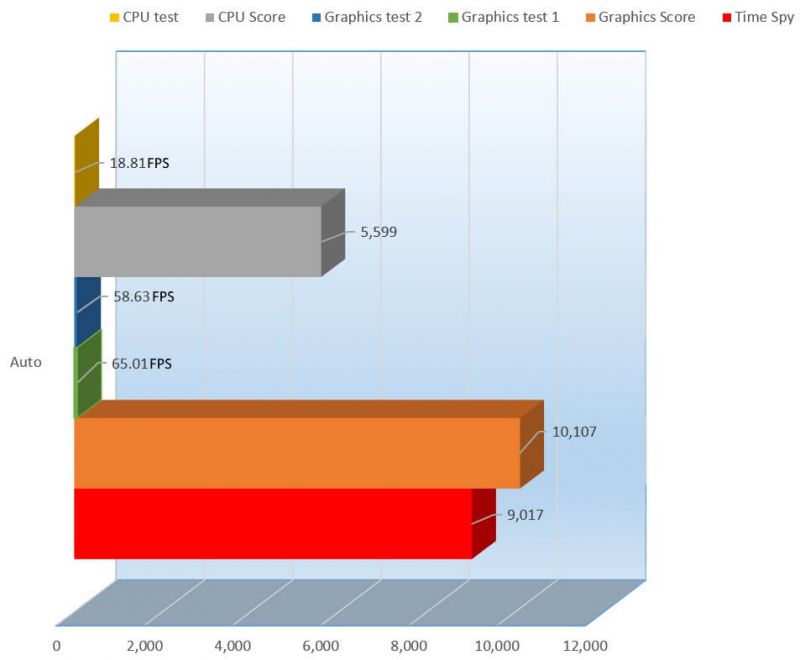 Yet another great score here but 3DMark and TimeSpy are very GPU centric, though they do rely a bit on CPU and Memory frequencies and timings and we will explore that a bit more in the review when we get into the real CPU overclocks.  The highest the CPU temperature reached was 62°C and the GPU was 71°C.

At 91% better than all other results, I feel like there is some more work we can do here.

Let’s check out what 7Zip can do here.  7Zip will rely heavily on the CPU and memory. 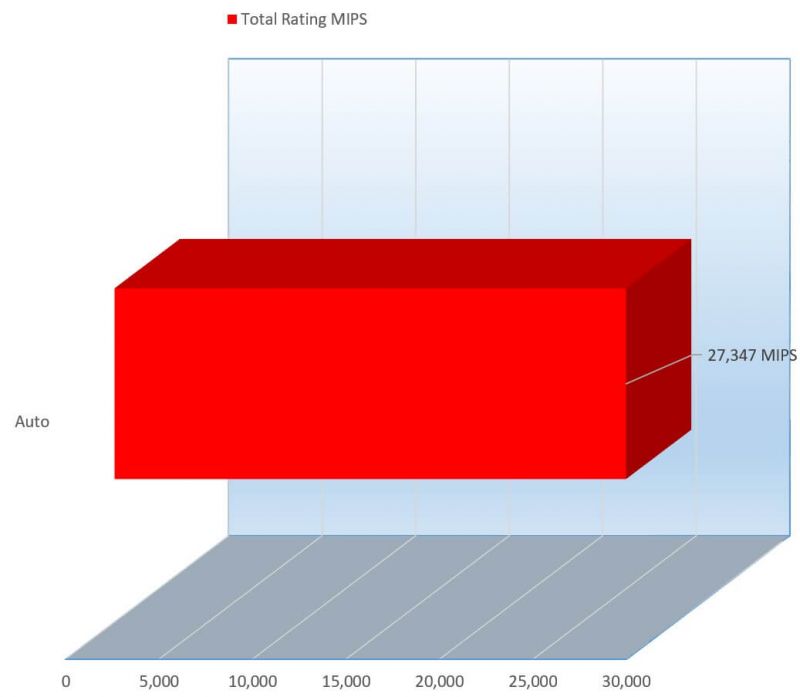 7Zip, may not look like much on its single comparison, but later I will compare it to the overclocked performance and we will see just what it can do.  Remember, the memory here was already overclocked to 3200Mhz.  The CPU rose to 57°C.  Let’s check out AIDA64. 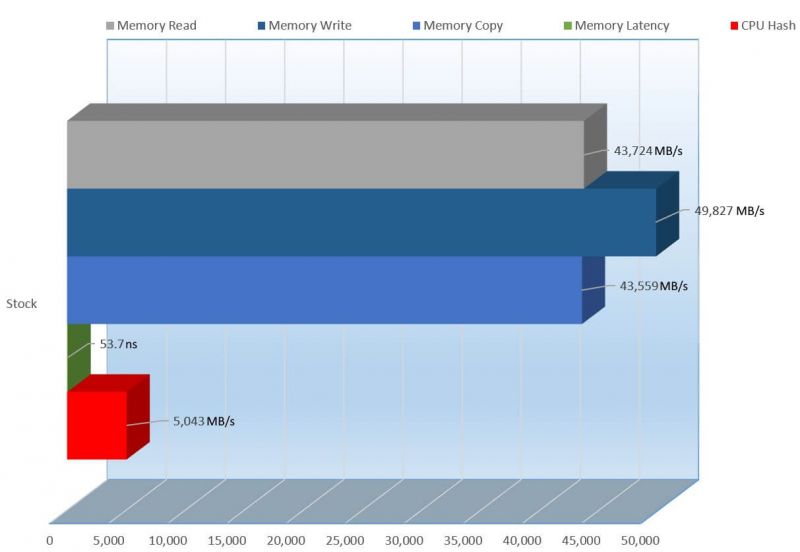 ADIA64 is great, because it can test many aspects of your PC.  For the tests above, we performed many Memory and CPU test.  The memory tests might be a bit self-explanatory, how quickly it reads, writes copies and its latency but CPU Queen might be a little less descriptive.  CPU Hash measures the CPU performance using SHA1 hashing algorithm.

Another great piece of software that tests overall system performance is PCMark coming from our friends at FutureMark that also make 3DMark and Time Spy.  Let’s see what it says. 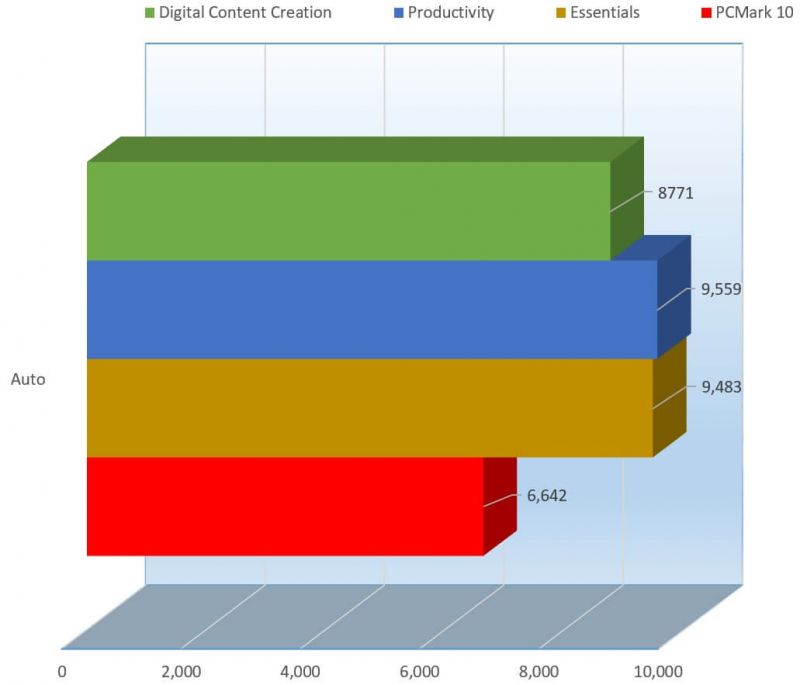 They might not mean much now, but in the end these scores might help to understand overall performance.  During these tests, the highest temperature the CPU reached was 67°C and the GPU was 65°C.

With this performance, PCMark resulted in achieving better than 98% of all other PC’s tested.  Not bad at all right?

Last but certainly not least, let’s check out SiSoft Sandra. 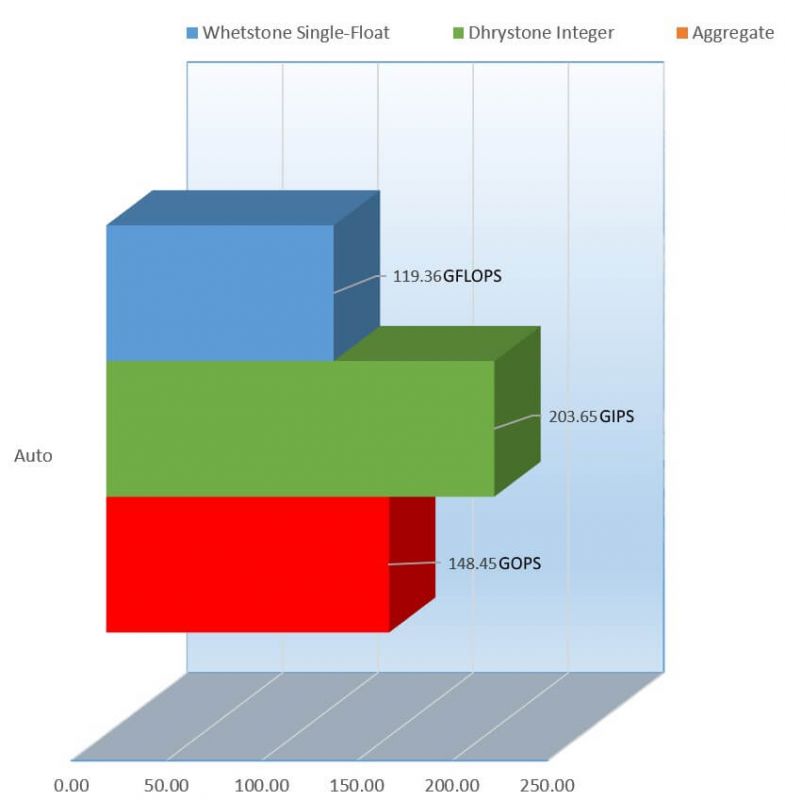 OK, so let me show you what everything was set to in the BIOS, then we can move onto the overclocks. 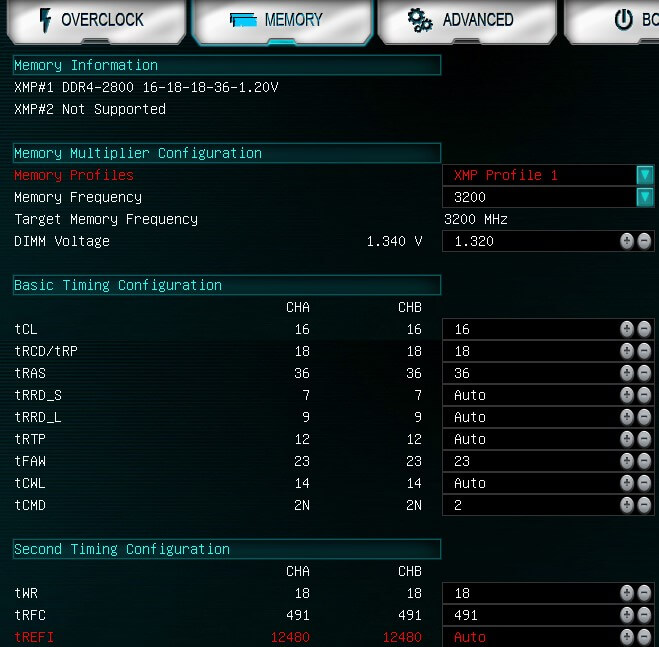 On the Memory tab, you can see that XMP Profile 1 was selected, but overclocked to 3200Mhz. 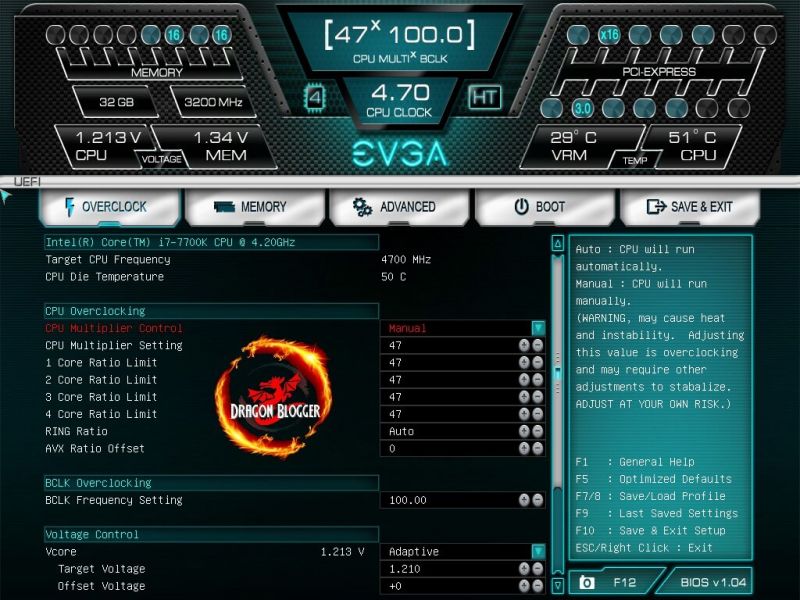 On the Overclock tab, you can see the changes we made here.  Make note of the AVX Ratio as it will be mentioned a little later in the review.  To help keep temps down, I dropped the Offset voltage to +0 enabled Adaptive for Vcore and set the Target voltage to 1.210.

Let’s get to the CPU overclock then for comparison. 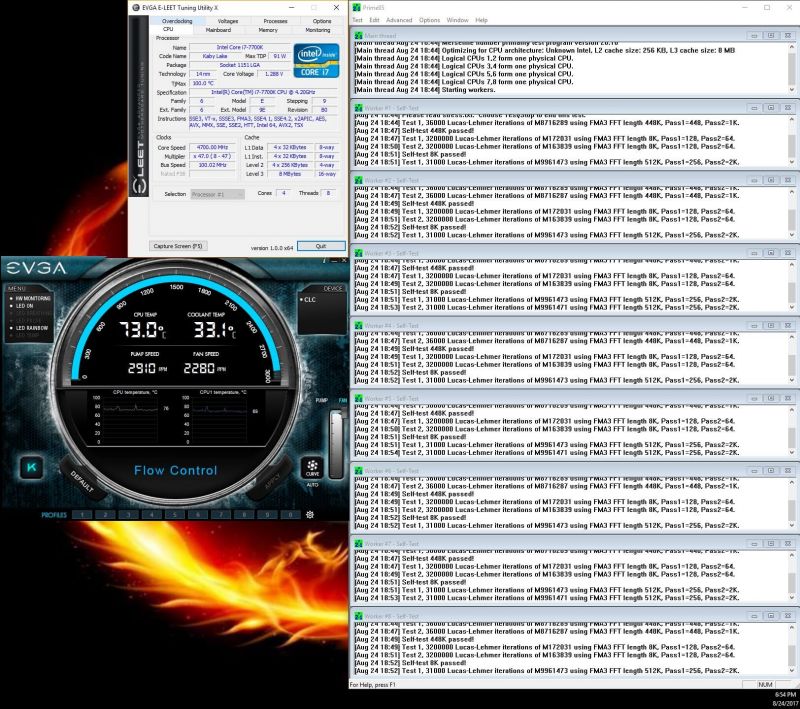 For this I am using an Intel Core i7 7700K, which is known to be a hot processor even with the EVGA CLC 280 Liquid CPU Cooling unit.  While this is not a review of either, I will be later reviewing the EVGA CLC 280 Liquid CPU Cooling unit in a separate review, with the processor maybe de-lidded, not sure yet so keep an eye out.

Here are some screenshots of EVGA’s E-LEET Utility X.  I did not use it for overclocking, though it could be but I used it to make sure the CPU did not throttle which it did not.  This CPU can hit a 100°C TjMax before it throttles.  It throttles to protect itself from burning itself out damaging the CPU, Motherboard and/or more. 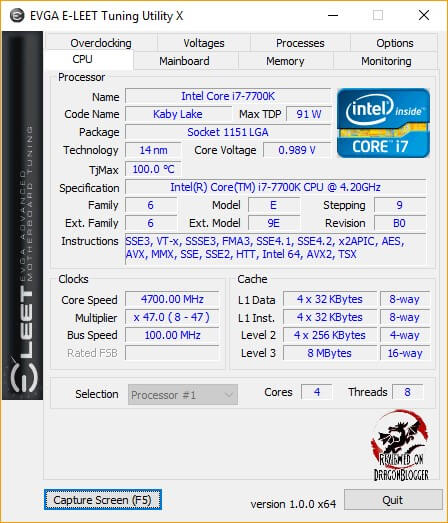 I took these screenshots while the system was benchmarking. 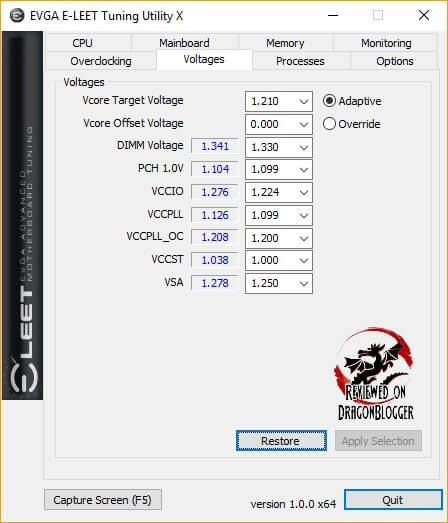 I had the BIOS set for 1.210 Target Voltage and the Vcore set to Adaptive with the Offset set to +0, but I will show you the BIOS screenshots as well.  You can adjust these voltages here as well for testing purposes but they will not save into the BIOS. 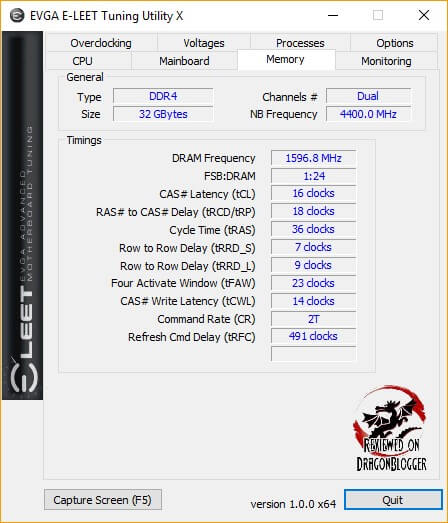 During this review, before I started benching, I realized EVGA came out with a newer BIOS, 1.04 so I flashed my BIOS to it.  I previously had the memory overclocked to 3333Mhz on BIOS version 1.03 but after the flash, I could only get it to 3200Mhz, my previous settings did not work though I am sure I could have hit 3333Mhz, but I did not want to spend too much more time on that. 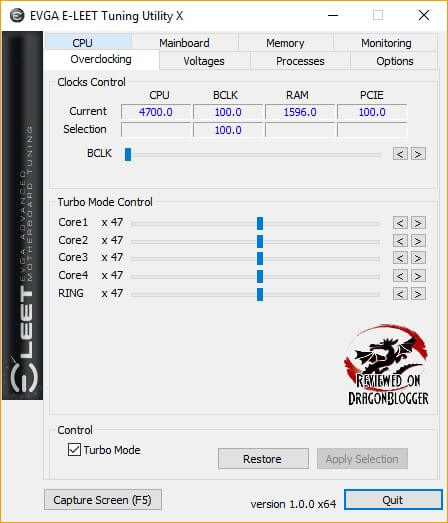 You can adjust the CPU Multiplier as well as the BCLK ratio from here as well, again for testing as these will not carry over into the BIOS. 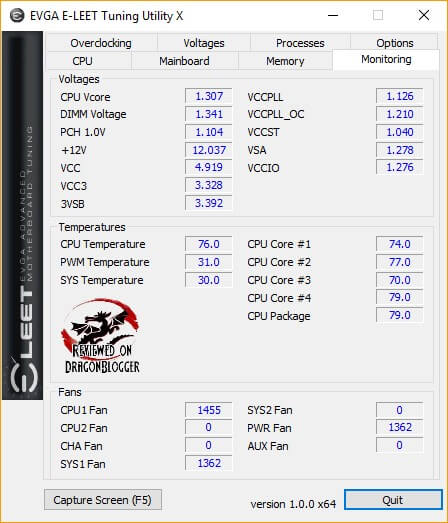 Here are the voltages and temps while benching.  Now some BIOS shots. 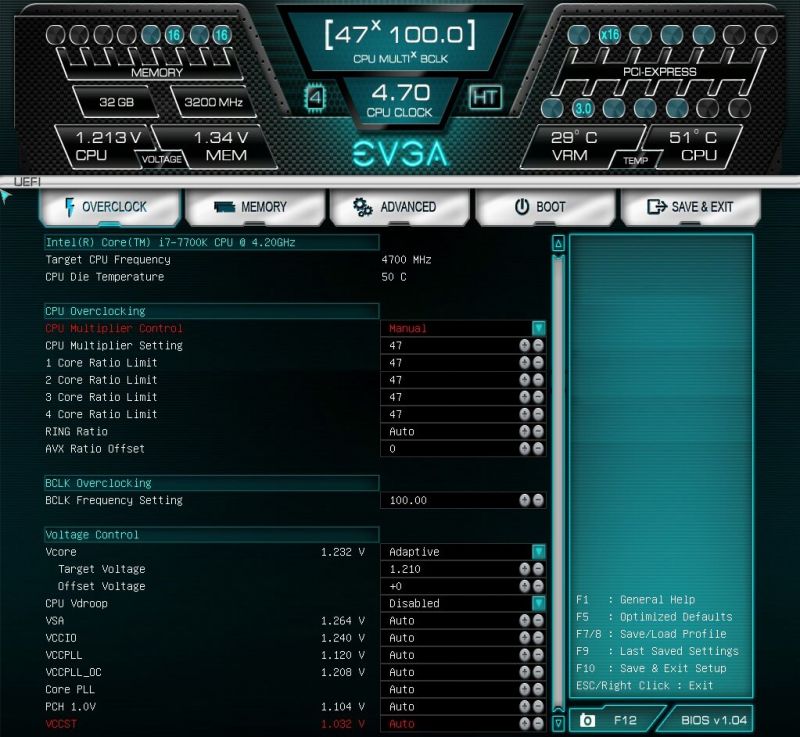 Pretty basic settings and I usually like to define everything, but this board seems to handle Auto very well. 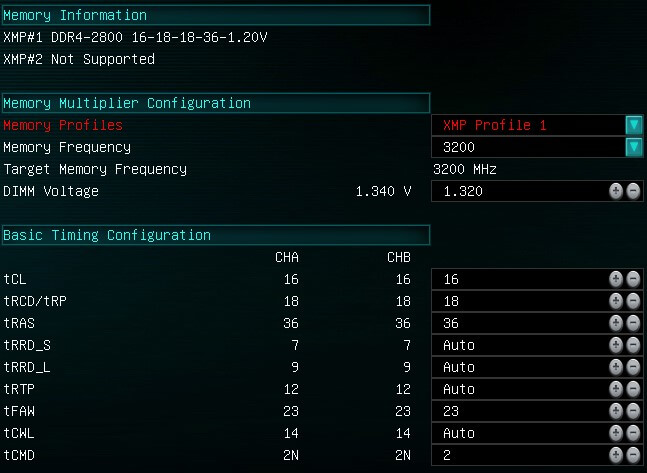 Moving over to the Memory tab, you can see the 3200Mhz setting I was talking about.  Not a big deal really, but I wanted to show you how it differed from my Patriot Viper Elite Series DDR4 32GB 2800MHz review.  So on to the benches and comparisons. 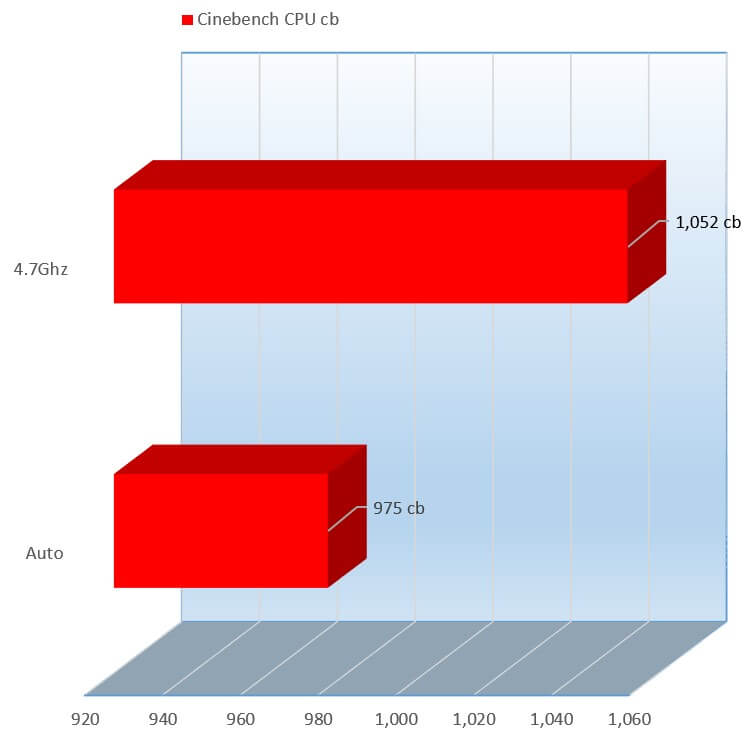 With this 4.7Ghz overclock, we can see the Intel Core i7 7700K inching that much close to a 6 core 12thread Intel Core i7 3930K processor.  A little more over an overclock we can easily pass its performance.  Its stock clock temperature was 58°C with this nice overclock the temps rose to 74°C, a 21.62% increase.  Let’s see what 3DMark has for us. 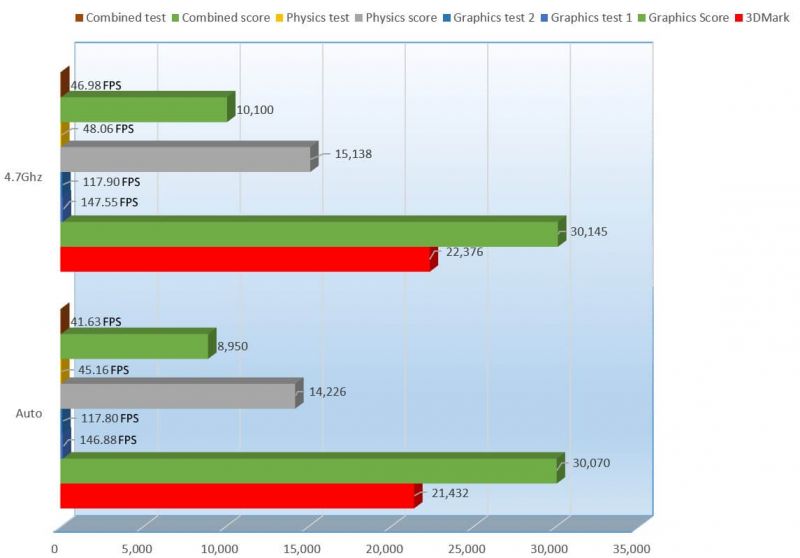 Between Auto and 4.7Ghz, we can see a clean sweep in performance in favor of the 4.7Ghz overclock.

Along with the sweep, previously on auto the 4.2/4.5Ghz heated up to 61°C while the overclocked 4.7Ghz heated up to a still decent 70°C.  The GPU at stock rose to 67°C while the overclocked 4.7Ghz, not touching the bus speed actually went down a degree to 66°C.  Since it was an insignificant 1°C, we know that this was not affected by the overclock, more by chance and since the bclock was not touch nothing here would have affected the temperature.  Let’s see what occurs with Time Spy. 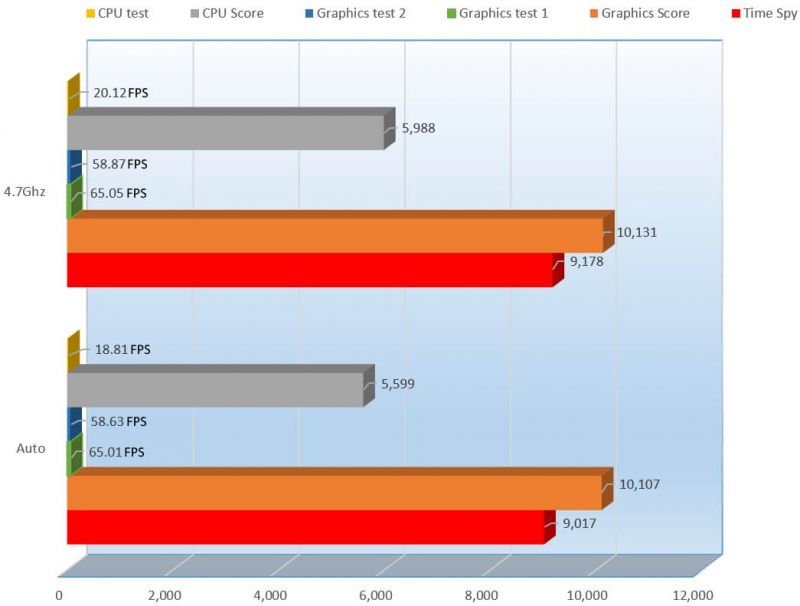 Like we saw previously in 3DMark, another clean sweep here in performance in favor of the 4.7Ghz overclock.  The temps in here in previous stock speeds were 62°C on the CPU and overclocked at 78°C, a 20.51% increase in thermals.  On the comparison, it actually went to 94% better than all other results which is very nice, a bit more and who knows where it can go.  Will this overclock affect 7Zip any? 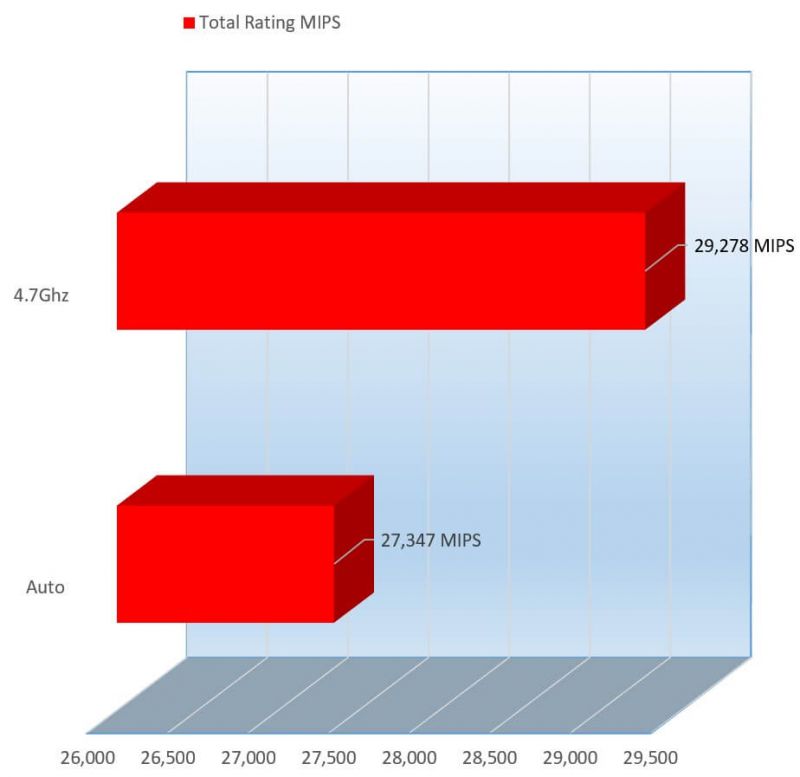 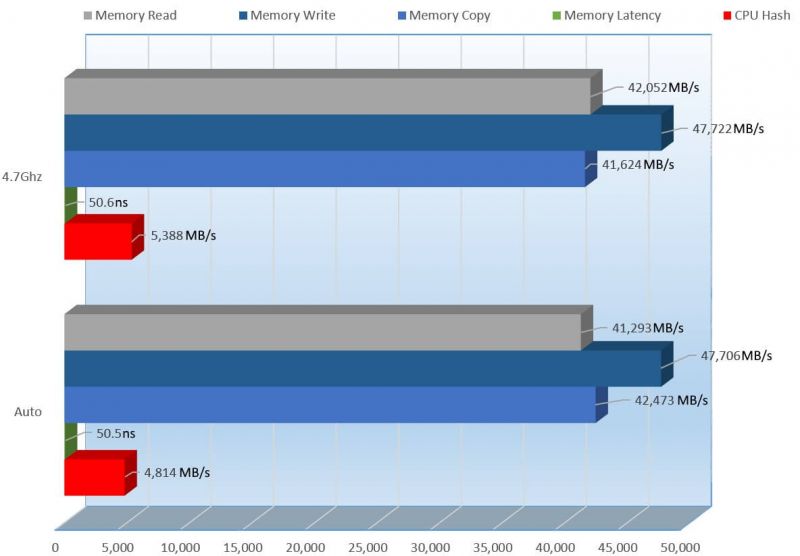 This is one is a bit mixed, as you can see most of the results were higher in the overclocked results except for one, if you only look at it as higher is better.  In all of the results we can see that once again the overclocked 4.7Ghz performed better but in the Memory Latency test it was .1ns lower.  Like the internet, when the latency is lower you will get better and smoother results, so actually the overclock affected the latency negatively, but it was by only .1ns so I think it is safe to say that this would not have affected anything.

With this overclock CPU temps skyrocketed a bit, coming up to 91°C for the package.  The stock clocked processor came in a 66°C, so there was a 27.48% increase in thermals due to the overclock.  I think this calls for a delidding or maybe better thermal paste.

Another one of my favorites for benchmarking, is PCMark.  Let’s see what PCMark says about this overclock. 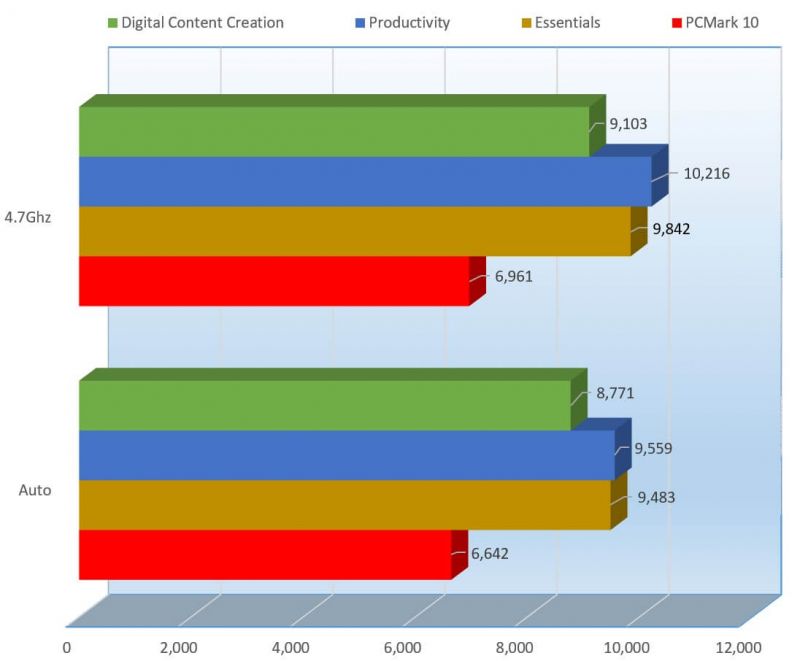 The overclock leans to their not being a huge downside as yet again it provided a clean sweep in its favor.  All of the results once again dominated over the stock CPU performance.  The main downside however does strike again, being the thermals.  At stock, the hottest a single core, including the package got was 67°C but on the overclock, the CPU reached 87°C though still a decent temperature it is 22.99% higher.

At stock, the scores resulted in outperforming 98% of all PC’s benchmarked and it can’t get much better can it?  Turns out it can, overclocked it actually performed 99% better than all other PCs benchmarked, that is a nice little treat. 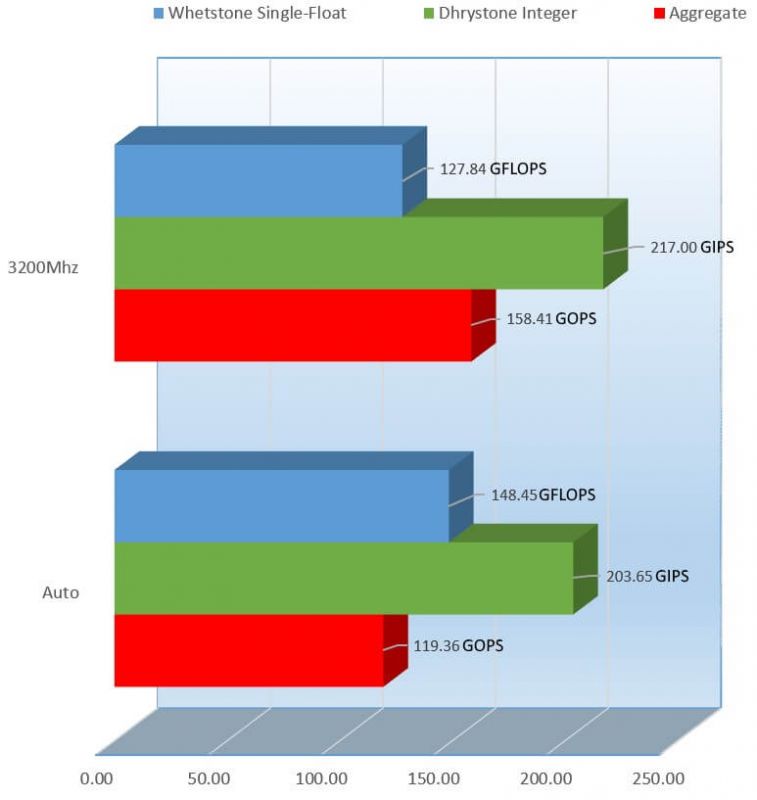 The thing about AVX is Whetstone performance is based off of AVX instructions, without them there a higher overclock would of course result in a lower score.  AVX or Advanced Vector Extensions are extension to the x86 instruction set to support integer comments up to 1024 bits for encoding purposes.  With NVIDIA’s CUDA or AMD’s Stream Processors AVX might be somewhat irrelevant unless your encoding program utilizes AVX only.  It is your battle to choose.

On the overclocks, we see what a nice Memory and CPU overclock can do, and I did these to show you what the board can handle, and it can do a lot more than just these.  I would have spent much more time with a higher overclock on both, but I did not want to spend too much more time on the review as it is late as it was but it is just to give you an idea of the control you are capable of.

We spoke about software

A motherboard is a lot more than just CPU and memory control, let’s go to the next chapter to see what else this board offers.